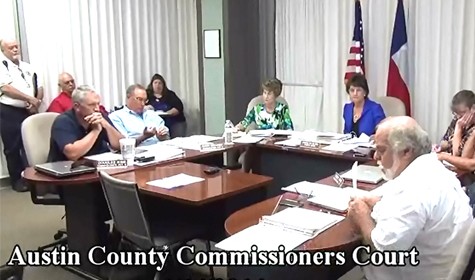 This decision came as a unanimous vote by the commissioners that they would put a “band aid” on the problem and fix it in the new fiscal budget.  After this plan was put in motion by Austin County Sheriff Jack Brandes the problems seemed to be subsiding.  Sparks flew though when Turner addressed the court Monday in regards to an inquiry Judge Bilski made to the Texas Jail Commission about a hardship variance of 1 jailer to 48 inmates.  This refers to Title 37 Part 9 Chapter 275 Rule 275.4 of the Texas Administrative Code.

Inmates shall be supervised by an adequate number of jailers to comply with state law and this chapter. One jailer shall be provided on each floor of the facility where 10 or more inmates are housed, with no less than 1 jailer per 48 inmates or increment thereof on each floor for direct inmate supervision. This jailer shall provide documented visual inmate supervision not less than once every 60 minutes. Sufficient staff to include supervisors, jailers and other essential personnel as accepted by the Commission shall be provided to perform required functions. A plan concurred in by both commissioners’ court and sheriff’s office, which provides for adequate and reasonable staffing of a facility, may be submitted to the Commission for approval. This rule shall not preclude the Texas Commission on Jail Standards from requiring staffing in excess of minimum requirements when deemed necessary to provide a safe, suitable, and sanitary facility nor preclude submission of variance requests as provided by statute or Chapter 299 of this title.

This means that currently by Texas Jail Standards, we have enough jailers, but safety is an issue and current administration has told Commissioners Court that more jailers are needed to house all of the inmates in Austin County safely.

Turner stated that he is standing by what the Commissioner’s voted to do that since the vote ACSD has not lost anymore jailers.  This is in comparison to the six that were lost prior to the change of pay. “I’m disappointed that the Judge went around that Court vote and went around the Sheriff and didn’t discuss it with the District Attorney either and she called the Texas Jail Commission and whatever words she used raised an inquiry and now instead of interviewing people I am told by the Captain (Lynn Drake) and the Sheriff they are filling out paperwork from the State Jail Commission,” stated Turner in Mondays meeting.

Bilski called the Commission after trying to work on the current budget.  “I am the Chief Budget Officer, I have the responsibility and authority to protect these tax payers,” stated Bilski, “I called and asked simple questions.  I did not go around this court.  I did ask these same questions of the Sheriff that day in Commissioner’s Court,”

Bilski along with the County Auditor, Betty Jez, is currently trying to find a budget amendment of $10,300 for two weeks of inmates.  This is referring to the amount currently owed to Fort Bend County.