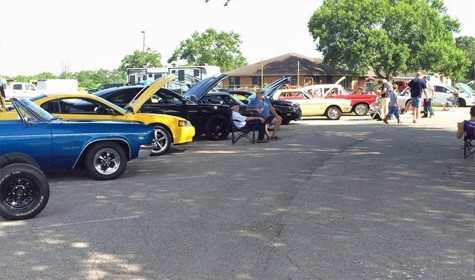 Saturday morning at the Sealybration festival car enthusiasts were able to enjoy the sight as 48 cars paraded to the Liedertafel at 116 Lux Rd.  Whether you enjoy looking at classics or new vehicles the car show had something for everyone.  The show began with a car parade and ended with each entry lined up at the Liedertafel where festival goers could walk through and enjoy each car.

Awards were given for Best Show, Runner-up and Showmanship. “This year we added a car show for attendees,” stated Melanie Willingham, President of The Sealy Community Foundation.  The car show was presented by West Houston Muscle and sponsored by Bumbera’s Performance.  The organizer of the event was Joshua Ward.

“We had 48 entries in the car show,” stated Ward.  Winners received trophies and bragging rights for years to come. The winners were Best in show Winner, Rick Hail with his 1957 Ford Fairlane hard top convertible, Runner-up, John Rerich with his 1968 Dodge Charger and the Showmanship award went to Jim Elmore with his 2013 Dodge Challenger.