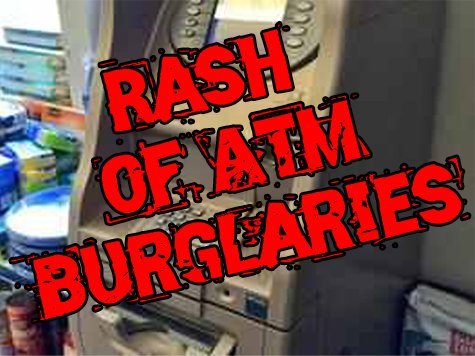 Recently, there has been a rash of ATM burglaries in Austin County. Over the past few weeks, the culprits were successful on gaining entry into some ATMs.  The robberies occurred in Sealy, Wallis, Industry and in Bellville. “On June 6 at 2 am they broke into The Lucky Stop in Bellville, but were unable to get the ATM open,” said Austin County Sheriff Jack Brandes, “that same morning 40 minutes later, they broke into P and M Quickstop in Industry and were unsuccessful at getting that ATM open as well.”

However, on June 14 at Linderman store in Industry they broke in and were able to get an undetermined amount of cash.  According to footage taken from the security cameras at each of the crime scenes the suspects were wearing black clothing along with black gloves and face masks.  On June 24th in a routine stop at 4 am, Sealy police officers made a traffic detention that resulted in the arrest of 4 black males for possession of criminal instruments.

“The suspects were found to be in possession of several cartons of cigarettes, a large amount of single packs and several rolls of coins,” stated Brandes.  “They were wearing black clothing, and had black gloves and facemasks these matched what were on the security camera footage.”

The suspects were also in possession of two large yellow pry bars, which also coincided with the tools used to commit the burglaries on the security footage.  They were in a gold colored 2003 Nissan Altima 4 door the night they were detained.  One suspect was found to have a set of keys for a Buick vehicle, which matched the description of the vehicle at several of the break-ins in the surrounding counties and cities.