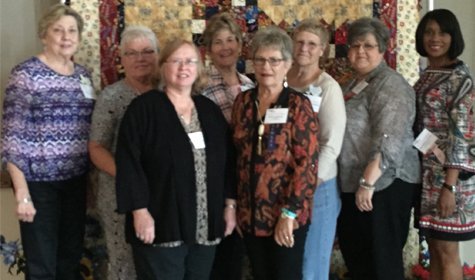 Eight Extension Education members of Austin County had the opportunity to participate in their State TEEA Conference during the month of September in Waco, Texas. Those representing Austin County were: Jessie Kokemor, Doris Glenewinkel, Knellen Quniteros, Carolyn Balke, Gaye Farr, Karen Landrum and Judy Schultz.  Austin County’s Delegates were among 430 plus members, representing 254 counties, during their participation at the state conference.  The conference gave members the opportunity to renew friendships, gain knowledge and skills and witness the true meaning of volunteerism.  In addition, Austin County had two members recognized for their cultural arts abilities.  Pam O’Brian (2nd Place – Painting/Drawing) and Bonnie Schulz (3rd Place – Recycled Items) had the opportunity to be recognized among some of the best cultural art exhibitors in Texas.  In all, Austin County was represented well.  The following members also had the chance to compete at state: Joan Buenger, Debra Kollman and Geraldine Siptak.  Well done ladies!

Picture: Left to Right Back Row

Michelle Allen is the Austin County Extension Agent for Family and Consumer Science.  She can be reached at (979) 865-2072 or you can email her at lm-allen@tamu.edu