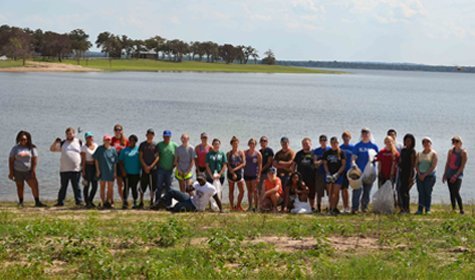 Blinn College students have stepped up to expedite the reopening of a state park devastated by flooding.

The intercampus cleanup team hauled off logs and branches and removed trash and debris from the park’s Cedar Elm, Yaupon and Post Oak campsites. Heavy May rains led to a 20-foot increase in water levels at the lake, leaving every structure damaged and several of its campsites under water. The park is on track to reopen Nov. 1.

Park staff told Blinn natural science instructors and cleanup organizers Kelly Kissane and Mark Hutchinson that what the students accomplished in one day would have taken the park’s small team approximately a week to complete.

“The students recognized that what they did is going to serve the greater Brazos Valley,” Hutchinson said. “They’re helping provide access to a state park that people would not have been able to enjoy otherwise.”

Alongside cleanup duties, students observed an array of wildlife, including snakes, frogs, birds and fish, adding a real-word application to topics covered in their biology and zoology classrooms.

“They enjoyed helping and they learned a lot by observing the wildlife and the damage the flood had caused,” Kissane said. “The students worked the entire time. It was dirty work and it was hot, but no one complained.”

Students enrolled in Blinn Service Learning courses, which combine community service with classroom instruction to engage students in civic responsibility and critical, reflective thinking, earned credit for the weekend project. Blinn students have documented more than 456,000 hours of Service Learning and community service hours valued at more than $9.1 million by the Points of Light Foundation.

Blinn has twice been honored with the Carnegie Foundation for the Advancement for Teaching Community Engagement Classification, in 2010 and 2015. An independent policy and research center, the Carnegie Foundation encourages colleges and universities to become more deeply engaged, to improve teaching and learning and to generate socially responsive knowledge to benefit communities. It selected colleges based on institutional practices of community engagement demonstrating alignment of mission, culture, leadership, resources and practices.