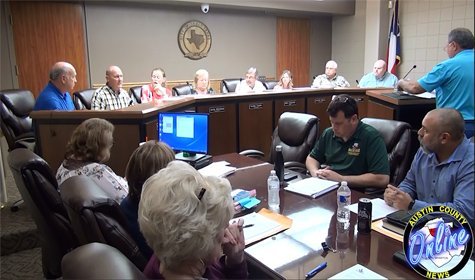 (NOTE:  The portion of the meeting concerning the citizen’s utility bills, both citizens speaking and council speaking, was very long.  We’ve written a synopsis of the events below with time stamps of the video for you to be able to go directly to that portion for viewing)

Last night’s Sealy City Council Meeting was filled with citizens angry about an increase in their utility bills.  Some citizens took to the podium to address the council directly while others made their concerns known simply with their presence at the meeting.  But, the message was quite clear, that the increase was not OK.

Just before the petitions/requests for the public portion of the meeting, councilman Michael Kubricht asked if it would be possible for the city manager to address the crowd directly.  City Manager Larry Kuciemba stated that he had been made aware of the huge increase in citizen’s utility bills during the weekend.  He stated that the two factors in tabulating the utility bill, rate and consumption, consumption appears to be up on many bills.  The rate was calculated per the new ordinance that was passed by council earlier this year but, that the city would continue to try to see where the problem lies and this would take at least to the end of the week.  (00:01:42 to the 00:03:23 portion of the video below)

Several citizens were then allowed to voice their concerns over their utility bill.  (00:03:33 to 00:34:29 of the video below)  The increases that the citizens outlined to the council varied according to their usage but, one citizen stated that they experienced an increase of 215% on their utility bill.

The city council, due to the meeting rules, was unable to respond directly and individually to the citizens’ concerns.  However, at the close of the public comments Council Woman Sullivan encouraged everyone to stay to the end of the council meeting when council would be able to address the crowd directly and voice their feelings on the matter.  Councilman Kubricht also spoke and asked the mayor how the citizens should proceed?  Should they pay their bill, should they wait and pay it and risk late charges etc?  The mayor explained that, per the city attorney, they would have to have a special meeting before definitive action could be taken but, that no one would have their water cut off or incur any penalties related to the billing issue until it could be resolved by the city.  (00:34:28 to 00:36:39 portion of the video below)

The City Council Addresses the Citizens

The final portion of the meeting was “Request(s) for future agenda items and comment(s).”  At this point some council members directly addressed the crowd’s concerns while others simply asked clarifying questions of the city’s Director of Public Works, Mark Velasquez.  Mr. Velasquez explained that the meter reading is done electronically.  A worker can drive down the street and a device he carries communicates with each citizen’s water meter directly.  If the reading is within normal parameters of that citizen’s usage, then nothing happens.  But, should the device receive a reading that is grossly out of proportion to a citizen’s use then the software flags that meter and the worker then takes a manual reading and looks for issues with the meter.  He also stated that a representative for the software and hardware used to take these readings is set to meet with him this week to see if there is an issue with the collection portion of the city’s utility bill compilation.  The city manager also stated that they would be working with their respective IT support people to see if the issue was on the billing side.

The city council is set to meet Monday in a special meeting to discuss the billing increase of the city utility bills.  They will also decide how the city will proceed with the matter as well as the ordinance passed earlier this year concerning rate increases.

Here is the breakdown of where each council person spoke in relation to the utility bill issue in the video above.