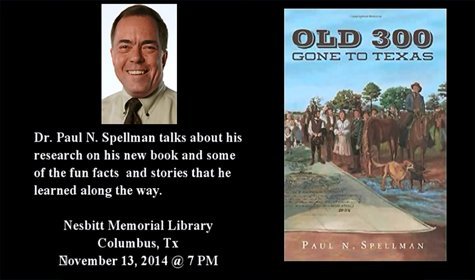 Austin County, nestled along the Brazos River, is so rich in the history that made Texas what it is today.  Many authors have tried to capture the history of this area.  Paul N. Spellman a Texas History Professor at Wharton Jr. College has done just that with his account of what the first 300, known as the “Old 300”, settlers experienced in their move to the Northern Territory of what was considered Mexico and became the grand state of Texas.

The adventure for the settlers began years earlier before their arrival to the grand state of Texas.  Spellman notes that an Earthquake in Missouri in 1811 was the beginning point for his book and the catalyst that prompted some of the “Old 300” to seek livelihood elsewhere.  The earthquake now known as the beginning of the New Madrid Earthquakes was on a scale of about a seven according to the present day Richter Scale.

Spellman sites that this earthquake may have been the common denominator that pulls the “Old 300” together.  “The areas affected by this earthquake were the areas the settlers came from, the earthquake had to have had some impact on them,” said Spellman at his book signing.

Moses and Stephen Austin arranged for a settlement where a certain number of settlers would come and settle in a particular area that was known at that time as Mexican land. Mexican officials figured the settlers would help be a buffer zone to protect them from Indians.  The Austins set up contracts with the Mexican government for 300 families to receive 4,400 acres plus for settlement and labor.  Spell explained that some of the original 300 never came to Texas they were actually partnerships of single men that filed as families and received their acreage.

The myth that Austin brought the original 300 families to Texas is untrue.  There were only seven families that made the trek to Texas.  By 1824 there were actually 24 families from each of the 24 states of the Union that came to Texas.  There was the only state of the Union with more than one family as part of the “Old 300” and that was Maine.  Families actually came from England, Scotland and Canada.  Spellman goes on in his book signing to explain that the settlers of the “Old 300” came by several different ways to settle Austin’s Colony.  “Some came by way of boat, some were already in Texas and followed the other settlers as they made their way to the Colorado River,” said Spellman.

Listed in the “Old 300” names there are six widows who either lost their husbands prior to the move or along the way.  By 1825 there is actually 25 of the “Old 300” who died before they had a chance to settle the land.  Spellman tells of the hardships they all faced.  “Accounts of earthquakes, floods and pirates are all in the book,” said Spellman about the hardships of the “Old 300”

Spellman enthralled the audience at the Library in Columbus, TX as he told about his journey of writing the book.  When he finished his first draft of the book it was over 600 pages long and he knew he would have to cut it back.  So as he did this he kept a running tally of the families’ stories and near the end he realized he was one family short of the “Old 300”  He had sited the accounts from 299 including Austin and his brother.

This left him with the job of locating the last entry so he did his research found the missing person and was fortunate that he did have notes on the missing person. Working on a deadline, Spellman called his Editor and had him add the information about the person and the book was then complete for editing.

Three and a half years and much research later Spellman’s Book about that monumental part of Texas History has been published.  Currently he is making his rounds signing copies of the book and offering his account of the journey he made while writing the book.

The book is described as follows:

A broad and dramatic saga of the American westward migration to Texas between 1817 and 1825, this is the story of 300 families who made their way from all across the United States and four countries to settle in Austin’s Colony in Mexican Texas. An in-depth, personal look at the families, this adventure considers why they came to Texas, how they got here, and what they shared together in the early years. Most of their stories begin a decade before their arrival on the banks of the Colorado and Brazos Rivers, from action during the War of 1812, through the early Texas filibusters and expeditions, and under the guidance of Moses Austin and his son Stephen F. Austin. It is at once a story of courage and sacrifice, dangers and tragedy, dedication to a dream and desire for a fresh beginning. The story is diverse and filled with unexpected surprises for both traveler and reader. There are American Indians resisting the settlers, pirates on the prowl, earthquakes and hurricanes and deadly floods taking their toll. These first mostly Anglo settlers included large families, young newlyweds, and single men in commercial partnerships, widows and widowers, the very young and the very old. Some brought slaves, some came destitute, and some came rich and eager. There were the scurrilous and the fugitives among the lot, all collectively signing on to Austin’s Colony as the iconic Old 300.

If you are interested in a copy of the book “Old Three – Hundred Gone to Texas” you may purchase it at Amazon.com in Paperback or electronic Kindle Edition.