Sit-In At The House, Democrats Vow To Block House From Doing Work [VIDEO] 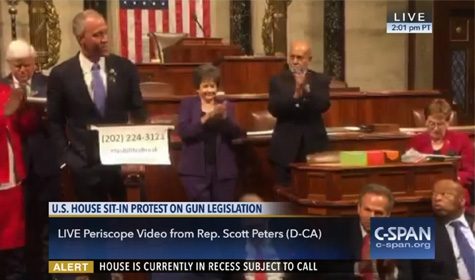 In a surprising move by the Democrats of the U.S. House of Representatives, a “sit-in” has happened in protest of gun legislation not being brought to the house floor.

“We will occupy this floor!” Rep. John Larson, D-Conn., bellowed as Democrats sat on the floor.

“After the worst mass shooting in modern history, it’s time for Speaker Ryan to bring a bill to the floor,” said the office of House Minority Whip Steny Hoyer, D-Md. “House Democrats will continue to demand: no bill, no break.”

But, Reason Magazine’s Ed Krayewski writes that, “there’s no specific gun bill House Democrats have in mind. Despite their rhetoric, gun control has not been high on their legislative agenda, and they appear to be simply exploiting emotions surrounding the Orlando shooting, an exercise I’ve noted was dangerous for the way it can be used to limit civil liberties, restrict immigration, and even expand America’s military interventions abroad.”

Other media and politicos are characterizing the “sit-in” by pro-gun control House Democrats as “historic”.  Other news outlets aren’t so sure.

But, the most dangerous part of much of the legislation that is trying to be rushed through is the way that it has currently been discussed.  Many of the bills that have been floated have focused on utilizing the FBI’s Terrorism Screening Database (TSDB, a.k.a. the Terrorist Watchlist): the “no fly” list, which includes people barred from air travel within the United States, and/or the “selectee” list, which includes people who must undergo additional screening before flying.  All of these are focused on methods that deny American’s due process.

You can watch the start of the sit-in in the video below: