NOTE:  This article Authored by Michael Snyder via TheMostImportantNews.com

Violence has erupted in major cities all over America yet again today, and we are being told to brace ourselves for more rioting, looting and civil unrest in the days ahead.  The death of George Floyd was a great tragedy, and the vast majority of Americans agree that we do not want to see that sort of police brutality in our nation, and so this should actually be a moment that brings our country together.  But instead, America is being torn apart.  The protests against police brutality have been hijacked by sinister forces, and they are attempting to channel the outrage over George Floyd’s death in a very violent direction.  As you will see below, law enforcement authorities all over the U.S. are telling us that they have identified a highly organized effort to orchestrate violence, and this appears to be happening on a nationwide basis. 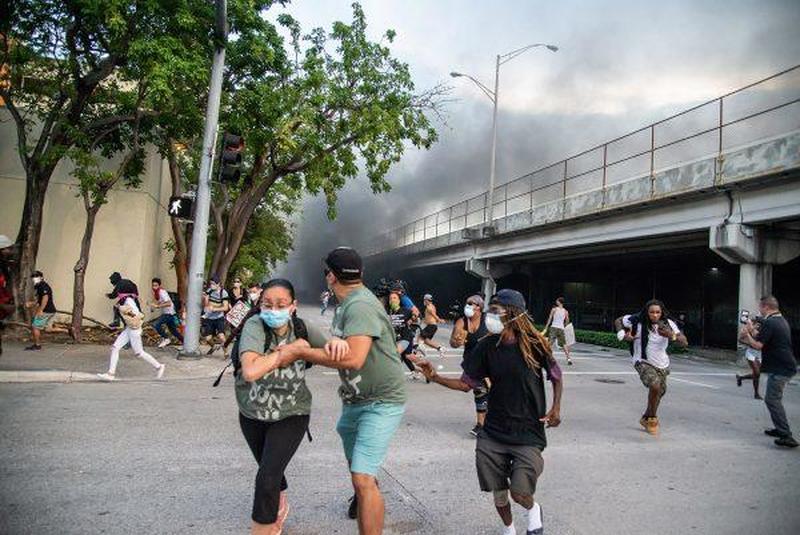 Let’s start by looking at what is happening in New York.  According to the top terrorism official in the entire city, “certain anarchist groups”  were making preparations for “violent interactions with police” before protests in the city even began…

On Sunday night, New York’s top terrorism cop, Deputy Commissioner for Intelligence and Counterterrorism John Miller, detailed his office’s analysis and investigation into why the New York City protests have become so violent and damaging at times.

“No. 1, before the protests began,” Miller said, “organizers of certain anarchist groups set out to raise bail money and people who would be responsible to be raising bail money, they set out to recruit medics and medical teams with gear to deploy in anticipation of violent interactions with police.”

And once the protests started, these groups used “a complex network of bicycle scouts” to direct rioters to locations where police officers would not be present…

“And they developed a complex network of bicycle scouts to move ahead of demonstrators in different directions of where police were and where police were not for purposes of being able to direct groups from the larger group to places where they could commit acts of vandalism including the torching of police vehicles and Molotov cocktails where they thought officers would not be.”

These are not just mindless angry mobs.  They are being directed with a purpose, and that is very alarming.

In Chicago, Mayor Lori Lightfoot has publicly acknowledged that there has been “an organized effort” to turn the protests over George Floyd’s death “into something violent” in her city…

Speaking at an afternoon news conference today with other officials, Lightfoot didn’t say whether the groups are out-of-state left-wing anti-fascist organizations generally known as Antifa, right-wing agitators, local street gangs or something else. She said she’s asked three federal agencies—the FBI, the Bureau of Alcohol Tobacco Firearms & Explosives and the U.S. Attorney’s office—for help, with a focus on AFT’s bomb and arson unit.

“There is no doubt. This was an organized effort last night,” she said. “There were clearly efforts to subvert the peaceful process and make it into something violent.”

Lightfoot did not really elaborate on why she believes there has been “an organized effort”, but officials in other cities have been willing to give the public more specifics.

For example, law enforcement authorities in Minnesota have discovered “several caches of flammable materials” that were obviously intended to be used for rioting…

Earlier Sunday, state officials said several caches of flammable materials were found both in neighborhoods where there have already been fires and “in cars we’ve stopped as recently as this morning,” said John Harrington, state public safety commissioner. Some of the caches look like they may have been planted days ago and some only in the last 24 hours or so, he said.

Police are also finding stolen vehicles with plates removed that are being used to transport the flammable materials. Looted goods and weapons also have been found in the stolen cars, he said.

And in several other cities around the nation, law enforcement authorities have found bricks staged at or near protest sites.

On Sunday, police in Kansas City announced that they had found “stashes of bricks and rocks in & around the Plaza and Westport to be used during a riot”…

Kansas City police officers found bricks and rocks staged near protest sites around the city, stoking concerns that individuals or groups had pre-planned looting and destruction that hit the city over the weekend, the department said Sunday.

“We have learned of & discovered stashes of bricks and rocks in & around the Plaza and Westport to be used during a riot,” the department said in a tweet on Sunday.

And in Baltimore, law enforcement officials were racing to dismantle “mounds of bricks and bottles” that had been staged in downtown Baltimore…

According to sources, mounds of bricks and bottles have been found in Downtown Baltimore.

Baltimore Police confirmed they are working with law enforcement partners to sweep the area.

There are several demonstrations planned for Monday evening. Sources told Fox 45 officers are being briefed on the situation during roll call.

In New York, a “cache of bricks” just happened to be sitting directly in the path of rioters on Sunday evening…

Similarly, in New York City, video captured the moment rioters in Manhattan chanced upon a cache of bricks between St. Marks Place and Seventh Street in the East Village on Sunday evening, though no construction site appeared to be nearby.

Even down in Texas, “a large pile of bricks” was stacked up in front of the courthouse in Dallas and huge stacks of bricks were pre-staged right along a path that protesters would be taking in Frisco.

I don’t know about you, but I have a very hard time believing that all of this is just a giant coincidence.

The fact that huge piles of pre-staged bricks are suddenly showing up at protest locations all over America indicates a level of planning and coordination at a very high level.

Obviously we are dealing with something that is far more complex than just a few thousand angry people letting off some steam.

With the U.S. economy in deep disarray and with a presidential election coming up in November, anger and frustration are likely to remain at very high levels in the U.S. throughout the summer, and that will give those that are organizing these efforts more opportunities to promote violence.

Needless to say, the lawlessness that we are witnessing in the streets of our major cities is greatly alarming millions of ordinary Americans, and gun sales are going through the roof…

Gun sales surged in May as shops reported an uptick in interest and demand as the coronavirus pandemic continued and amid national protests after the Memorial Day killing of George Floyd.

“Almost, you couldn’t even keep up with it – that’s how crazy it was,” said Joe Hawk, owner of Guns & Roses in New Jersey. “After Memorial Day, it spiked again – it just went crazy again.”

Small Arms Analytics & Forecasting, a private research firm, estimated that there were more than 1.7 million gun sales in May – an 80% jump from May 2019.

The thin veneer of civilization that we all take for granted on a daily basis is disappearing, and a lot of people believe that a lot more civil unrest is ahead.

Our nation is more deeply divided than it has ever been in my entire lifetime, and that is not likely to change any time soon.

So I would very much encourage you to do whatever you need to do to get yourself and your family prepared for what is coming, because America appears to be on the precipice of complete and utter chaos.

Article reprinted from ZeroHedge.com at:  https://www.zerohedge.com/political/shocking-evidence-suggests-effort-orchestrate-uprising-inside-united-states