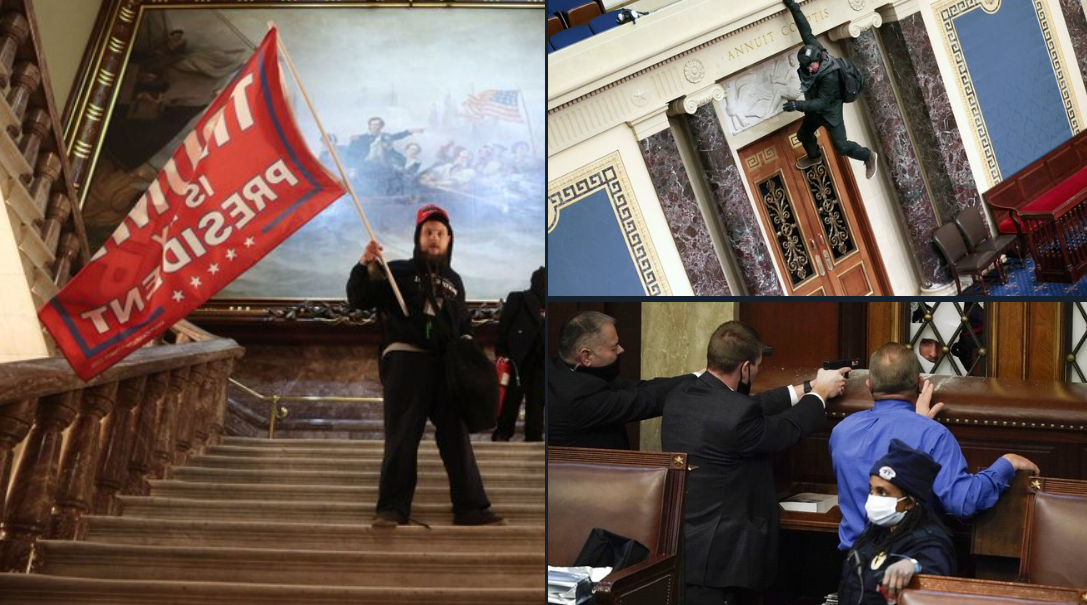 *PENCE CALLS FOR 'VIOLENCE,' 'DESTRUCTION' AT CAPITOL TO END

Update (1533ET): Several media outlets are reporting one person was shot on Capitol grounds about 30 minutes ago. 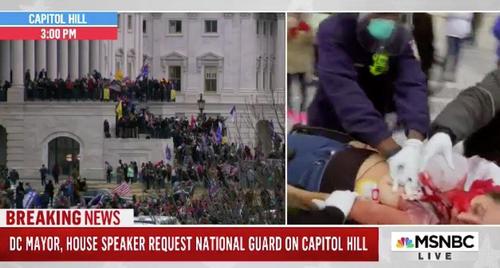 Apparent gunshot victim being rushed out of the Capitol building.

GRAPHIC FOOTAGE: Apparent gunshot victim being rushed to ambulance at US Capitol pic.twitter.com/5KUqr3KFsm

We are awaiting more information.

Update (1520ET): Within the past hour, President Trump has tweeted again, this time urging “everyone at the U.S. Capitol to remain peaceful.”

Trump continued: “No violence! Remember, WE are the Party of Law & Order – respect the Law and our great men and women in Blue. Thank you!”

I am asking for everyone at the U.S. Capitol to remain peaceful. No violence! Remember, WE are the Party of Law & Order – respect the Law and our great men and women in Blue. Thank you!

Update (1512ET): More views of protesters on the Senate floor.

BREAKING: Protesters are on the Senate floor now: pic.twitter.com/k4Q0ln8pZs

Additional views from inside the Capitol. 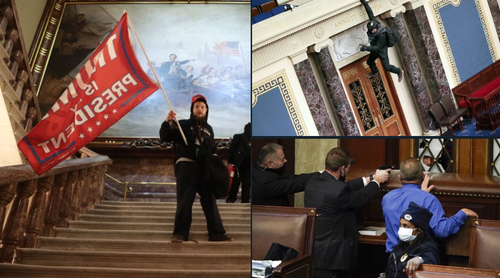 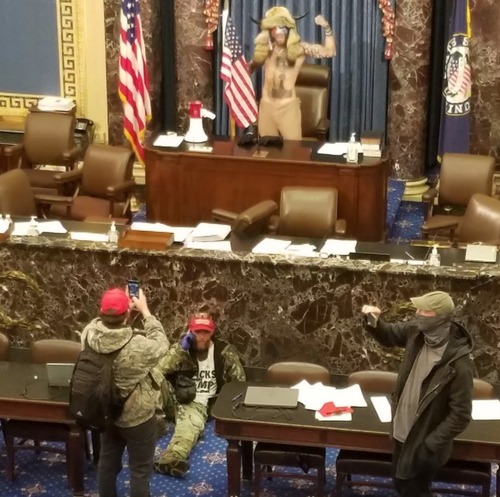 Update (1508ET): Here’s a stunning view of protesters using a window washing platform to get to higher floors of the Capitol. 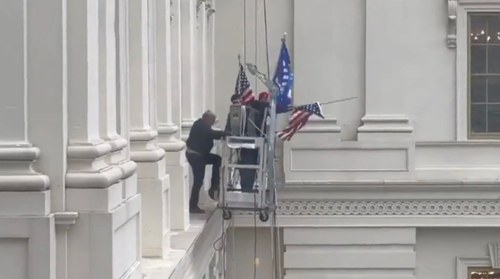 Update (1455ET): “Officers have drawn their firearms inside the chamber of the U.S. House of Representatives after supporters egged on by the president breached the Capitol,” tweeted Reuters’ Brad Heath.

Video from the chamber. pic.twitter.com/UKF7MScHKN

“Lawmakers have been told to get ready to put on gas masks and have retrieved gas masks from under the seats. There is banging on the door to the chamber,” Bloomberg’s Emma Kinery tweeted.

Follow along here for live updates on what’s happening at the Capitol: https://t.co/XeJlFbDua3

Please support our Capitol Police and Law Enforcement. They are truly on the side of our Country. Stay peaceful!

Following President Trump’s address to supporters at a rally in Washington on Wednesday afternoon, a group of demonstrators marched to the US Capitol and reportedly breached several layers of security barricades around the building.

Just before 1300 ET, a group of Trump supporters “toppled the barricades, storming through them to the grassy fields leading to the Capitol,” according to WaPo.

Inside the Capitol, Congress is meeting to certify the electoral college votes for President-elect Joe Biden

HAPPENING NOW: Crowd grows increasingly violent at the US Capitol

Trump supporters are attempting to break police lines at the Capitol.

Trump supporters are trying to break past police lines at the Capitol building.pic.twitter.com/kzLo2vWyfq

“Whoa: Trump supporters going at it with the police on the steps of the Capitol as Congress counts the Electoral College ballots inside,” HuffPost’s Philip Lewis tweeted.

Whoa: Trump supporters going at it with the police on the steps of the Capitol as Congress counts the Electoral College ballots inside pic.twitter.com/LiQhaa5KkQ

Representative Haley Stevens tweeted that she is “sheltering in place in my office.” She said the building next to her is being “evacuated.”

Stevens wrote: “I can’t believe I have to write this.”

I’m sheltering in place in my office. The building next door has been evacuated. I can’t believe I have to write this.

Here are more views outside of the Capitol. The Daily Dot’s Zachary Petrizzo said police are now firing tear gas into the crowd.

Here is the current scene on the front side of the US Capitol Building. pic.twitter.com/ngdkaFby00

Apparently, the crowd outside the Capitol is increasing in size.

apologies for the blurry pics y'all, it's busy over here!

CNN’s Kaitlan Collins has just tweeted the “US Capitol is now on lockdown.”

The US Capitol is now on lockdown.

Protesters are now at the steps of the Capitol.

Protesters have made it to the doors of the Capitol.

The view from inside the Capitol, where Trump supporters are trying to breach the doors. pic.twitter.com/YiEbuJ3FX6

Protesters have made it inside the Capitol building.

Protesters have breached the Capitol. They’re outside the Senate chamber pic.twitter.com/I021tKliUD

This article appeared at ZeroHedge.com at:  https://www.zerohedge.com/political/capitol-hill-staffers-ordered-evacuate-after-protesters-breach-security