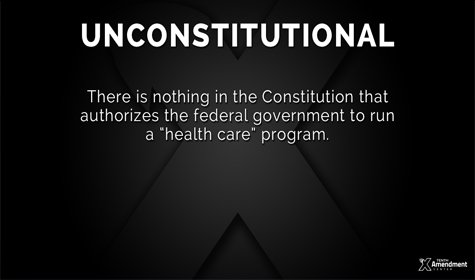 Obamacare’s conservative critics are right about the program’s intrusive, inefficient, and costly aspects, but they need to keep in mind that the “crown jewel” of President Obama’s eight years in the Oval Office was the culmination, not the beginning, of unconstitutional nationalized medicine.

Although this didn’t directly affect healthcare, SSA was followed by the 1965 Social Security Act Amendments, which created two federal medical programs, Medicaid (for low income families) and Medicare (for people age 65 and older).

In the Journal of American Physicians and Surgeons, Dr. Donald W. Miller, Jr. writes on the effects these programs had on the healthcare industry through its introduction of a third party payer that guaranteed artificially high prices.

Healthcare spending in 1960 was 5.2 percent of GDP, $143 per person—equivalent to $1,125 in 2013 dollars. Lawmakers projected that Medicare would cost $12 billion a year by 1990. It cost $98 billion that year. In 2013, the annual cost of this healthcare program for people 65 years of age or older, and people under age 65 who are disabled or have end-stage renal disease, was $585.7 billion (and growing at a 3.6 to 4.1 percent rate annually). Medicaid is not far behind. The annual cost of this joint federal-state program, established to finance medical care for the poor, was $449.4 billion (and growing at a 6 percent annual rate).

The total amount spent for healthcare in the U.S. in 2013 was $2,900 billion, 17.4 percent of GDP, which amounts to $9,255 per person. This is a nearly nine-fold increase, adjusted for inflation, compared with what Americans spent on medical care before enactment of Medicare and Medicaid. (It is a 65-fold increase, $9,255/$143, in nominal dollars.)

When health costs started to go up, Miller writes, Congress responded by, surprise, passing more regulations. The Medicare Prospective Payment System (PPS), passed in 1983, was intended to place price controls on hospital bills by paying them a fixed amount no matter what the actual cost of treating the patient was. The reimbursement amount is based on the World Health Organization’s International Statistical Classification of Diseases.

And that’s just Medicare. According to a report by the National Center for Policy Analysis, there is more than $30.3 trillion owed in Social Security and Medicaid benefits.

“Only 9 Republicans in the Senate and 25 in the House joined the vast majority of Democrats in both Houses in voting against ‘Bushcare,’” Vance writes.

John C. Goodman even went as far as to argue that conservatives actually invented Obamacare.

The core of “Obamacare,” the requirement that individuals purchase health insurance, traces back to Stuart Butler at the conservative Heritage Foundation in the late 1980s. This can be seen in a 1989 Heritage monograph (p. 51). Ezra Klein points to University of Pennsylvania economics professor and conservative Mark Pauly as the father of the individual mandate based on Pauly’s co-authored 1991 Health Affairs paper (p. 8, item 3) supporting the idea.

Two years after Pauly’s paper, and using the same argument Pauly made about mandatory auto insurance, conservative Republican Newt Gingrich appeared on NBC’s Meet the Press enthusiastically supporting the mandate. (Gingrich re-endorsed the mandate on the same program on May 15, 2011, then recanted the next day after a firestorm of criticism and ridicule.)

A Republican governor, Mitt Romney, signed the mandate into law in Massachusetts in April of 2006. Barack Obama, as a presidential primary candidate in 2008, firmly opposed the mandate, but as president signed it into law on March 23, 2010.

As one doctor writes, Obamacare didn’t create anything new as much as it took from Medicare and Medicaid to help fund itself. What normally went to patients now goes to insurance providers.

American healthcare didn’t become “the most regulated in the world and the most criminalized” overnight, and it didn’t happen suddenly when Obamacare was signed into law. What has happened, and what we are witnessing today, is the result of actions taken by both major political parties over nearly a century.

Moreover, as Vance points out in his discussion on Medicaid there is nothing in the Constitution that authorizes the federal government to run any such program in the first place. This applies to every other federal health program as well.

Obamacare has become a favorite conservative tool to pillory the president, and he certainly deserves it. But unconstitutional federal intervention into healthcare is in reality a bipartisan project that would likely continue under a Republican president. It is going to be up to the states to rein in this overwhelming federal overreach.

The Tenth Amendment Center is a national think tank that works to preserve and protect the principles of strictly limited government through information, education, and activism. The center serves as a forum for the study and exploration of state and individual sovereignty issues, focusing primarily on the decentralization of federal government power as required by the Constitution.  This article originally appeared at: http://tenthamendmentcenter.com/2016/01/26/national-healthcare-didnt-start-with-pres-obama/