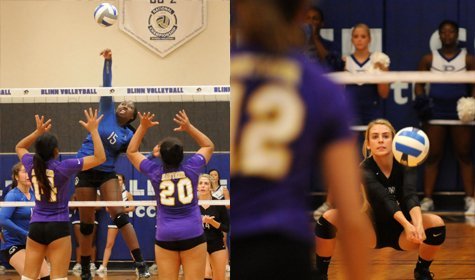 Blinn College volleyball coach Erin Mellinger wasn’t pleased to see her squad drop its first set of the season Saturday at the Applebee’s Classic. But she was thrilled to see the way they responded.

As they have throughout the early season, the Buccaneers were rolling until the second set against Navarro, when they fell behind 22-17. Blinn battled back to make it 23-24, but a missed serve ended the Buccaneers’ run at 22 consecutive set victories to open

“Navarro is going to be good,” Mellinger said. “We just weren’t challenging them enough
with our serve.”

The Buccaneers responded with a 25-10 victory in the third set.

“We did a really good job in responding,” Mellinger said. “We got better in that moment and I was proud of them.”

Mellinger was also pleased by the performance of her middle blockers. Heading into Saturday’s action, she had challenged both her setters and middle blockers to get the middles more involved in the offense.

“I was really pleased with our middles tonight,” Mellinger said. “I really wanted us to work the middles because I didn’t feel we had run the middles enough Friday, but we did a really good job against Navarro and our setters did a good job of getting them the ball. We got better today.”

The Buccaneers return to action Friday at the Wrangler Classic in Odessa. Blinn faces Vernon College at 1 p.m., then Odessa at 3.

No. 13 Blinn Set For Another Tough Conference Bout As No. 12 Navarro Visits In Week 5