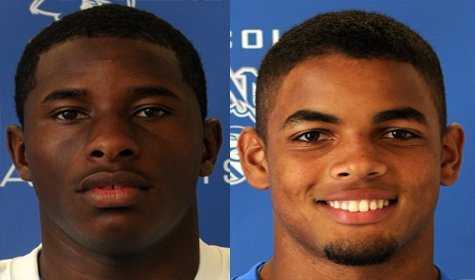 The Buccaneers wasted no time getting on the scoreboard in the first quarter as Jake Hubenak connected with Damion Ratley for a 47-yard touchdown strike. A 27-yard run by DeVante Mays made it 14-0 before Hubenak found Kaylon Melancon for a 40-yard touchdown pass, then found Dede Westbrook to make it 28-0.

The Bucs put the game out of reach in the third quarter. Klingler and Ratley hooked up again, this time for a 28-yard touchdown, before Klingler found Derick Brown on a 7-yard score.

Malik Pryor blocked a third-quarter punt and Ryan Payne returned it for a touchdown to extend the lead to 50 points before Brenham High School grad Ryan Nunn scored twice and Christopher Shepherd Jr. added another rushing touchdown to produce the final score.

“We knew he was going to be good,” Thomas said. “All four of our receivers are good – they’re tough to guard.”

Klingler and Hubenak split the playing time and each threw for three touchdowns. Thomas said he feels comfortable with both signal callers running the offense. Even more importantly, he said, the Buccaneers’ young offensive line was impressive.

“We knew our receivers would be good and our running backs would run hard, but we’ve got to be good on the offensive line to go far in this conference,” Thomas said. “We didn’t commit a holding penalty or an offsides, and the only sack the offensive line allowed came in the final minutes of the game.”

“We played well in all three phases of the game, and when you do that you’re going to win games,” he said.

The Buccaneers play their home opener at 7 p.m. Saturday, Sept. 6, when they host Tyler Junior College at Cub Stadium in Brenham.