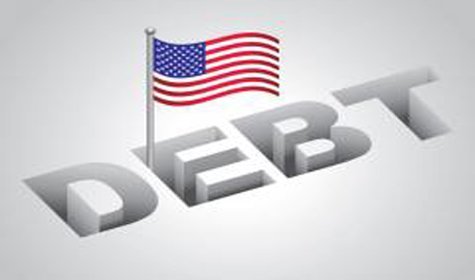 One of the reasons why Trump and Congress were so quick to pass a debt ceiling deal last week is that had they failed to do so, with the Treasury’s cash balance sliding precariously lower and expected to hit $0 by early September, there was a non-trivial chance the US could technically default by the time Congress came back from its August vacation.

Of course, that did not happen, a debt ceiling extension deal was reached, and as a result the Treasury is now free to start reloading its cash balance, and it plans on doing just that. On Monday, the Treasury Department announced its latest quarterly estimates of net marketable borrowing needs for the current (July – September 2019) and upcoming (October – December 2019) quarters. What it revealed was the following:

After borrowing just $40 billion in the past, April-June period, which left the Treasury with a quarter end cash balance of $264 billion, in the current quarter, the Treasury now expects Treasury issuance to explode higher, and borrow a whopping $433 billion in net marketable debt, a massive $274 billion higher – or more than doubling – its prior forecast announced in April 2019.

The reason for this debt issuance flurry? To rebuild the cash balance back to a level of $350 billion, which is where the Treasury expects its end-of-September cash balance to be, up from just $85 billion as of the April 29 forecast. 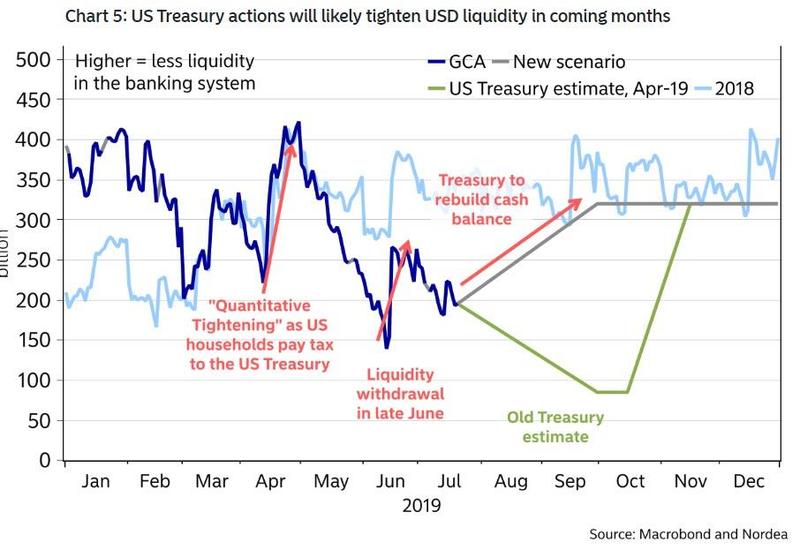 Looking ahead, during the October – December 2019 quarter, the Treasury unveiled for the first time that it expects to borrow $381 billion in new debt, assuming an end-of-December cash balance of $410 billion with $310 billion of the new issuance going to cover financing needs.

As for the past quarter, in April 2019, the Treasury estimated marketable borrowing of $30 billion and assumed an end-of-June cash balance of $270 billion. The change in borrowing resulted from lower net cash flows partially offset by the lower end-of-quarter cash balance due to the Treasury hitting the debt ceiling.

In other words, the Treasury will sell $814 billion in debt in the current and future quarter… and it will only gets worse from there.

As Bloomberg reports, the Treasury is expected to hold its quarterly note and bond sales at record levels for the third straight time as Washington’s latest budget deal shows that the U.S.’s debt binge will continue. While President Trump once said he would eliminate the national debt, he is now set to approve a budget that will help usher in trillion-dollar annual deficits. As a result, Bloomberg notes that Wall Street securities firms predict that a boost in Treasury issuance may be coming in a year’s time.

Bond dealers see the status quo prevailing at Wednesday’s quarterly refunding announcement. Forecasts are coalescing around the view that the Treasury will keep auction sizes of 3-, 10- and 30-year debt unchanged at a record total of $84 billion, in sales scheduled from Aug. 6-8. To put it in perspective, the tally was $62 billion at the time of the 2016 U.S. election.

The coupons issuance is expected to raise $296bn in new cash from private investors for the August to October period. This amount, coupled with $194bn in bill issuance, will help fund an estimated $272bn of financing needs plus $200bn of cash balance increase. 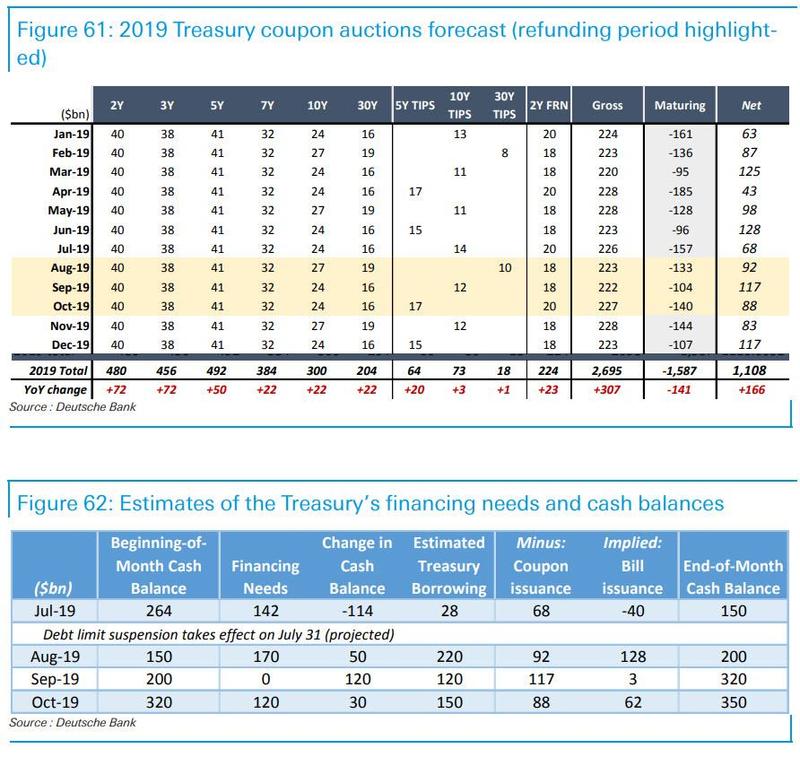 Additionally, with a July debt limit suspension, bills are expected to increase by $130bn in August, although as DB notes, the risk is that it could run higher. The Treasury’s decision to gradually rebuild its cash balance will help limit some of the pressure in funding markets. Higher repo rates would make issuance of front-end coupons more expensive. For example, 2yr Treasury-OIS has widened about 8bp in July since investors began expecting the August bill supply would put upward pressure on funding rates. In its refunding statement, the Treasury could signal that it would temporarily run a lower cash balance over the next several weeks, which should help alleviate funding market anxiety, although in light of the Treasury’s forecast that seems somewhat contradictory.  Indeed, with the Treasury’s decision to quickly rebuild its cash balance back to a level it deems more prudent (say $350bn), the increase to bills over the next 4-6 weeks significantly exceeds most Wall Street forecasts.

The bipartisan deal to suspend the debt limit for two years also paves the way for a $324 billion increase in government spending over the period above existing budget caps. That’s emboldening most dealers to pencil in increases in debt sales by fiscal 2021, which starts in October 2020.

The House passed the debt-ceiling expansion and budget bill on July 25 and Senate Majority Leader Mitch McConnell said he expects his chamber to clear it this week for Trump’s signature.

“The deficit is rising and the impetus toward higher spending is very strong,” said Stephen Stanley, chief economist at Amherst Pierpont Securities. “By the second half of next year Treasury will have to raise coupon sizes again.”

This is good news for Washington’s spenders… and a catastrophe for any deficit hawks left. With the president shoving aside past Republican orthodoxy on fiscal restraint and the issue not prominent among Democrats campaigning to take his job, Washington is showing no signs of slowing spending.

Which means that when it comes to fiscal conservatism, Trump is a Republican in name only, as the fiscal shortfall has continued to soar under Trump as tax cuts, bipartisan spending increases and entitlements weigh on the budget outlook. Meanwhile, socialist candidates for the 2020 presidential election are trying to attract voters with proposals that would only increase the gap such as MMT.

Maya MacGuineas, president of the nonpartisan budget watchdog Committee for a Responsible Federal Budget, called the latest budget deal “a total abdication of fiscal responsibility by Congress and the President.”

What’s clear – as Bloomberg concludes  – is the backdrop puts the $15.9 trillion Treasury market on course to balloon in the next couple of years.

“By 2021, Treasury will begin to have a problem, given deficit growth, and need to increase coupon sizes,” said Margaret Kerins, global head of fixed-income strategy at BMO Capital Markets. Then again, if the current administration is still in charge, the world will likely have far more pressing issue than the eventual insolvency of the US to worry about…

This article appeared at ZeroHedge.com at:  https://www.zerohedge.com/news/2019-07-29/us-treasury-now-expects-issue-over-800-billion-debt-two-quarters