US-China Trade Talks Collapse After Half A Day Of Negotiations

After roughly half-a-day of negotiations, the US trade delegation has broken off talks with its Chinese counterpart and is already on its way back to Washington, a sign that no new progress was made, and that trade talks between the US and China remain at an impasse. 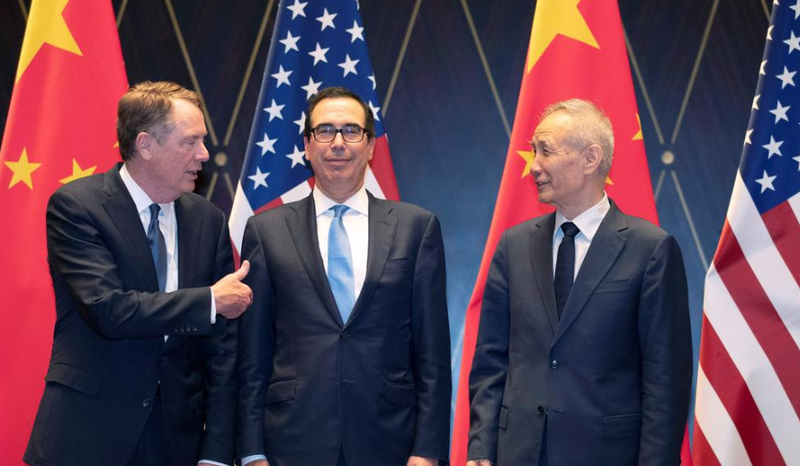 According to Bloomberg, US delegates including Treasury Secretary Steven Mnuchin and Trade Representative Robert Lighthizer wrapped up talks with Vice Premier Liu He and their other Chinese counterparts on Wednesday afternoon at the Xijiao State Guest Hotel in Shanghai, according to a pool report.

As the talks ended, China’s Ministry of Foreign Trade issues a response to President Trump, who has been warning the Chinese not to keep stalling on the talks.

In response to a question about Trump’s tweets, Chinese Foreign Ministry spokeswoman Hua Chunying said that although she was not aware of the latest developments during the talks, it was clear it was the US that continued to “flip flop.”

“I believe it doesn’t make any sense for the US to exercise its campaign of maximum pressure at this time. It’s pointless to tell others to take medication when you’re the one who is sick,” Hua said.

The People’s Daily, mouthpiece of the Communist Party, also responded to Trump on Wednesday with a commentary saying that China has no motive to “rip off” the U.S. and has never done so, and China won’t make concessions against its principles on trade.

This week’s meetings, the first in-person trade talks since a G20 truce last month, amounted to a working dinner on Tuesday at Shanghai’s historic riverfront Fairmont Peace Hotel and a half-day of negotiations on Wednesday, Reuters reports. Neither team commented publicly.

Liu He bid farewell to his US counterparts as their motorcade pulled away from the Guest Hotel following a group photo. The talks concluded at around 1:45 pm local time – roughly 30 minutes before they were scheduled to begin.

Of course, the latest round of talks took place against a jarring backdrop following a fresh outburst by Trump on twitter, who, as delegates gathered Tuesday, slammed China’s unwillingness to buy American agricultural products and said it continues to “rip off” the U.S.

The Chinese apparently didn’t make any new concessions to the US, despite last night’s PMI report which showed that China’s factory activity continued to shrink in July, a sign that the trade dispute is taking a serious toll on the Chinese economy.

What’s worse, the talks were supposed to focus on “goodwill” gestures, like the agricultural purchases promised by China, and the rollback of sanctions on Huawei promised by Trump. Apparently, the two sides are still at an impasse regarding these two issues. These issues, as Reuters reports, are “somewhat removed” from the more core US complaints in the trade dispute, including US demands surrounding forced technology transfers and state subsidies.

Hu Xijin, editor-in-chief of China’s state-run Global Times tabloid, wrote on Twitter that the negotiators had “efficient and constructive” exchanges.

“The two sides discussed increasing purchase of U.S. farm products and the U.S. side agreed to create favorable conditions for it. They will hold future talks,” Hu said, without elaborating.

Based on what I know, Chinese and US negotiators had an efficient and constructive deep exchange on Wednesday. The two sides discussed increasing purchase of US farm products and the US side agreed to create favorable conditions for it. They will hold future talks.

Earlier, the Global Times said if Washington still holds the illusion that Beijing will somehow cave in and compromise on issues concerning sovereignty, “then no deal is fine”.

Of course, few analysts expected this week’s talks – the first round of live talks since the second trade truce was struck between Trump and President Xi in Osaka – to yield much progress. But now that they’ve collapsed, does the Fed have the green light to deliver a 50 bp rate cut?

This article appeared at ZeroHedge.com at:  https://www.zerohedge.com/news/2019-07-31/us-china-trade-talks-collapse-after-half-day-negotiations