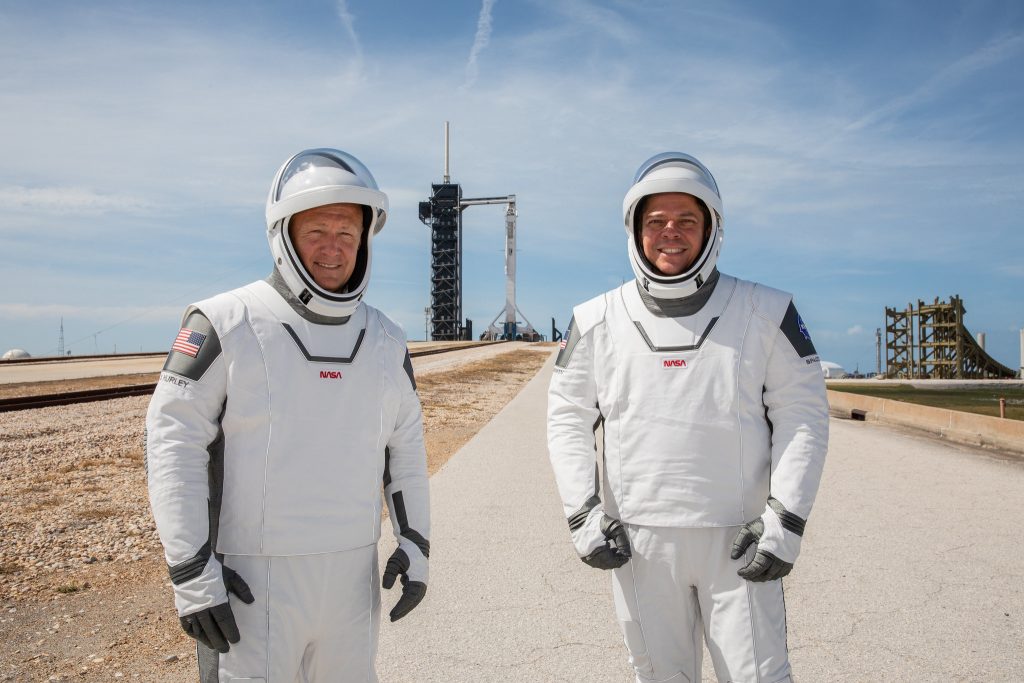 NASA astronauts Douglas Hurley (left) and Robert Behnken (right) participate in a dress rehearsal for launch at the agency’s Kennedy Space Center in Florida on May 23, 2020, ahead of NASA’s SpaceX Demo-2 mission to the International Space Station. Demo-2 will serve as an end-to-end flight test of SpaceX’s crew transportation system, providing valuable data toward NASA certifying the system for regular, crewed missions to the orbiting laboratory under the agency’s Commercial Crew Program. The launch is now scheduled for 3:22 p.m. EDT Saturday, May 30.
Credits: NASA/Kim Shiflett

NASA and SpaceX now are targeting 3:22 p.m. EDT Saturday, May 30, for the launch of the first commercially built and operated American rocket and spacecraft carrying astronauts to the space station. The first launch attempt, on May 27, was scrubbed due to unfavorable weather conditions.

The SpaceX Crew Dragon spacecraft will launch on a SpaceX Falcon 9 rocket from historic Launch Complex 39A at NASA’s Kennedy Space Center in Florida, and is scheduled to dock to the space station at 10:29 a.m. Sunday, May 31.

This will be SpaceX’s final test flight for NASA’s Commercial Crew Program and will provide critical data on the performance of the Falcon 9 rocket, Crew Dragon spacecraft, and ground systems, as well as in-orbit, docking, and landing operations.

The test flight also will provide valuable data toward certification of SpaceX’s crew transportation system for regular flights carrying astronauts to and from the space station. SpaceX currently is readying the hardware for the first space station crew rotational mission, which would happen after data from this test flight is reviewed for certification.

Due to the coronavirus (COVID-19) pandemic, media participation in news conferences will be remote, with only a limited number of media, who already have been accredited, will be accommodated at Kennedy. For the protection of media and Kennedy employees, the Kennedy Press Site News Center facilities will remain closed to all media throughout these events.

To participate in the Kennedy briefing by phone, reporters must e-mail ksc-newsroom@mail.nasa.gov no later than one hour prior to each event.

To participate by phone in the post-arrival news conference held at NASA’s Johnson Space Center in Houston, reporters must contact the Johnson newsroom at 281-483-5111 no later than one hour prior to the event.

Live NASA coverage is as follows. All times are EDT:

A media phone bridge will be available for this event. Mission operational coverage will continue on NASA TV’s Media Channel.

A media phone bridge will be available for this event. Launch commentary will switch to NASA TV’s Media Channel.

The deadline for media to apply for accreditation for this launch has passed, but more information about media accreditation is available by emailing ksc-media-accreditat@mail.nasa.gov.

This test flight is a pivotal point in NASA’s Commercial Crew Program, which is working with the U.S. aerospace industry to launch astronauts on American rockets and spacecraft from American soil to the space station for the first time since 2011.

The goal of the Commercial Crew Program is to provide safe, reliable, and cost-effective transportation to and from the International Space Station. This could allow for additional research time and increase the opportunity for discovery aboard humanity’s testbed for exploration, including preparation for human exploration of the Moon and Mars.