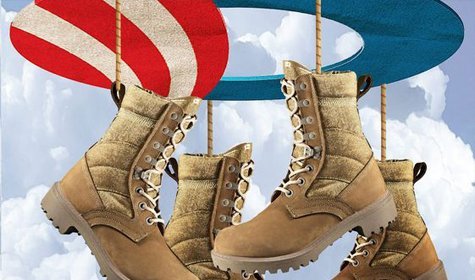 As the debate rages over whether the president needs congressional authorization for war prior to his deployment of the military to degrade or destroy ISIS, the terrorist organization that none of us had heard about until a few months ago, the nation has lost sight of the more fundamental issue of President Obama’s infidelity to the rule of law.

On the lawfulness of his proposed war, the president has painted himself into a corner. Last year, he quite properly recognized that the Authorization for Use of Military Force (AUMF), a statute enacted by Congress in 2002 to permit President George W. Bush to use the military to track down, capture, degrade or kill all persons or organizations that planned the attacks of 9/11, cannot apply to organizations that did not exist at the time of 9/11, of which ISIS is one.

That leaves the president with two remaining alternatives. One is the War Powers Resolution (WPR), a statute enacted by Congress in 1973 to limit presidentially ordered military invasions absent congressional assent to 180 days or fewer. But the WPR is unconstitutional, as it consists of Congress giving away to the president express authority to declare war, which the Constitution delegates to Congress. The Supreme Court has prohibited such giveaways of core powers and responsibilities from one branch of the federal government to another.

The remaining mechanism for starting a war is to follow the Constitution by seeking a congressional declaration of war. But Obama has not yet asked for such a declaration. Why not? No doubt, he has two fears. One is that Congress will impose restrictions on the location and duration of hostilities, unlike the AUMF, which is open-ended. The other is that he will disaffect his loyal political base by doing what he promised he would never do: bring the country into another offensive war in the Middle East.

In 2008 and in 2012, Obama ran as a candidate and an incumbent determined to end American military involvement in the Middle East, not increase it. Hence his promise, by now made many times, that he will not introduce ground troops into this war. Apparently, just as when he bombed Libya into chaotic instability in 2010, he does not consider bombs an act of offensive warfare.

But he does consider the use of boots to be an act of war. When the president promises no ground troops, note the phrase he uses: “No boots on the ground.” This is a term of art that apparently has different meanings to different folks.

There are already more than 1,000 pairs of American military boots on the ground in this effort to destroy ISIS. Yet, because they are not yet directly engaged in the use of violence in pursuit of ISIS fighters (they are training others to do so or finding targets to destroy by air), or because they are Special Forces and thus out of uniform (but no doubt armed and violent and wearing boots), the president feels he has a clear conscience when he says there are no boots on the ground.

In another deceptive move, Obama announced on Monday that the operation against ISIS, whether authorized by Congress or not, will be directed by retired Marine Corps General John Allen. This is a novel use of government assets, as Allen is no longer a part of the Pentagon and thus not subject to the military chain of command. Apparently, the president does not trust his military advisers, whose advice he has repeatedly rejected, to run his war. Is the White House planning to run this war directly as LBJ did in Vietnam? Is the State Department? How can a civilian who is not the president command military troops?

On Monday of last week, the White House announced that in its pursuit of ISIS, the U.S. will go wherever it finds ISIS targets, and if ISIS hides in Syria and the government of Syria does not permit U.S. jets to use its airspace, the U.S. will attack Syria. That sounds like Russian President Vladimir Putin in the Ukraine.

Attacking Syria because its government denied the U.S. airspace would be an unprovoked and unlawful act of war that would probably provoke Putin. Congress rejected declaring war on Syria just a year ago. If it does so now, there would be no lawful or moral basis for such a declaration, as Syria is a sovereign country, lawfully entitled to control its airspace, that poses no present threat to American freedom or security. The U.S. can no more legally commandeer Syrian airspace than Syria can commandeer ours.

Why all the unlawfulness, when he could and should leave these disputants to their own devices and keep the American military at home for genuine defensive purposes?