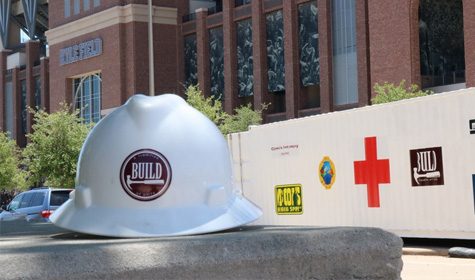 Good can come from tragedy if Aggie students have anything to say about it. The student-led organization BUILD has a mission of completing 12 Texas Aggie Medical Clinics (TAMCs) this fall, each dedicated to one of the 12 students killed in the 1999 collapse of the school’s annual bonfire.

BUILD is preparing to complete the three-year project to transform shipping containers into portable medical clinics destined for Central American and Caribbean countries with limited access to medical care.

“These clinics have a tremendous impact on the communities in which they are placed because a lot of the people in these areas are at least an hour drive from the nearest hospital,” says Mackenzie Rogers, a senior geology major from Frisco, Texas, and BUILD’s chief financial officer. “Many things we take for granted, such as anti-inflammatories and antibiotics, can keep injuries from turning life-threatening, but these communities don’t always have access to that type of care.”

So far the students have built eight clinics, which are located in Haiti, Honduras, Guatemala and Jamaica, with an eye next on Costa Rica. “We are currently serving about 2,000 people per week between all of the clinics we have in service,” Rogers notes.

Each portable clinic contains a waiting area, exam room and operating room and is outfitted with cabinetry, light fixtures and electricity, sinks and plumbing, and air conditioning.

Rogers says BUILD has many partners and donors who have assisted in making this project happen, including Medical Bridges, a Houston non-profit organization which, for a small fee, stocks each completed clinic with about $100,000 in medical equipment and supplies. “They also coordinate with the Non-government Organizations (NGOs) that accept these clinics to get the TAMC through customs and to make sure they have the capability to staff them with doctors and nurses,” she explains.

BUILD welcomes cash donations and Rogers says they are about halfway to their goal of raising $100,000. To make a donation, visit BUILD’s donation page.

The group will be starting construction on the final four TAMC’s on Sep. 26, planning completion by Nov. 4. Student volunteers and adult advisors can apply to work via BUILD’s volunteer page.

Rogers says being a part of BUILD is beyond rewarding. “It’s amazing to walk on site the first day and see four empty containers, then realize at the end of the project just how much work students from all over campus have put in to make these dreams a reality,” says Rogers. “We are also getting former students and other community members involved, and I love to see everyone’s reaction the first time they see a completed clinic.”

As for the future, Rogers says the group plans to continue building the clinics, hoping to dedicate the next project to fallen veterans.

Article reprinted from Texas A&M Today.  The Original article can be found at:  http://today.tamu.edu/2016/08/29/students-honoring-victims-of-bonfire-tragedy-with-ambitious-project/?utm_source=today&utm_medium=email&utm_campaign=2016-08-31&utm_content=Email-Students%20Honor%20Victims%20Of%20Bonfire%20Tragedy%20With%20Ambitious%20Project#lightbox/0/