Chair Wants Tolls To Come Off, Says Tolls Cause Congestion 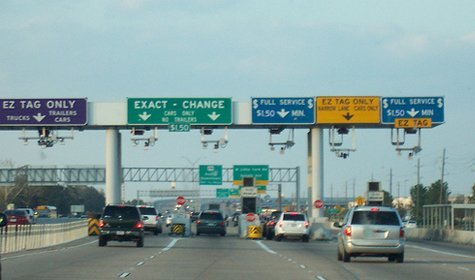 First, he argued that tolls are actually causing congestion on some roads.

“Toll projects actually exacerbate congestion. The one in my community does,” proclaimed a determined Pickett. Pickett’s referring to the Cesar Chavez Border Highway toll managed lane project where only 6% of traffic utilizes the lanes, leaving 94% of commuters stuck in congestion.

Pickett told KVIA News in El Paso last year that, “Things have changed and if you want to lessen congestion, you open up the roads to everyone.”

James Bass, Executive Director of the Texas Department of Transportation (TxDOT), said there are 51 toll roads in Texas with 25 financial systems. That works out to be 700 miles of toll lanes with 150 more miles under construction. The total outstanding debt owed on the existing system as of January 1, 2016, including principal and interest is $39.9 billion, but that number drops to $24.23 billion if they were paid off early.

Second, Pickett wants the tolls to come off many Texas roads. Camino Columbia in Laredo and Cesar Chavez in El Paso top his list, but he also wants to see them come off SH 130 (the state-operated northern 49 miles from Georgetown to Mustang Ridge), and SH 45 in the Austin area. But many more are eligible. The Katy Freeway managed toll lanes in Houston were paid for with federal and state gasoline taxes and no debt is owed on the $2.8 billion project.

Parts of the Grand Parkway around Houston (segments 1-2A, D, E, F1, and G), the I-30 managed lanes, the DFW connector and others are the same story – built with gas taxes, no debt owed, the tolls are a tax grab. The entire Houston Metro High Occupancy Vehicle (HOV) — High Occupancy Toll (HOT) lanes should have the tolls come down as well. Every one of those lanes was built with state and federal funds, no debt is owed, and yet they charge tolls simply to make some money off of the congestion on the general purpose lanes. Pickett pointed out that since 2003, the majority of gasoline taxes have been used to build toll projects, not freeways which is double taxation. He wants an honest accounting of the public money that was used and wants to make serious recommendations of a list of projects to start removing tolls.

HOV-bus-toll lanes favorite of bureaucrats
Social engineers and government bureaucrats love HOV, HOT or other types of restricted lanes as a means of punishing single occupancy cars in hopes of forcing them out of their vehicles and into a bus or carpool. They use it as a way to hijack public highways and pick the winners and losers of who gets a fast ride and who doesn’t, regardless of who paid the taxes that built the lanes or whether or not the HOV/HOT lanes actually work.

After 45 years of data, it’s safe to say they don’t. Transit ridership has not increased in 45 years. In most Texas cities, less than 3% of commuters use transit, and over 95% use their personal vehicle to get to work. So the gimmicks to try and get Texans to ditch their cars or get in a carpool or bus are pure folly. Add to that the fact that toll managed lanes are highly underutilized as Pickett cites, and it’s clear every form of restricted lane must go. They’re not working. They don’t alleviate congestion, nor do they keep Texas’ economic engine moving — the movement of goods across our state.

Third, Pickett suggested replacing toll debt with debt issued from the Texas Mobility Fund or other public resources to ensure the debt actually comes to an end and has a pay-off date. As it stands today, there is no plan in place to ever remove the tolls from Texas toll projects. Pickett insists the toll debt is in perpetuity, but Bass countered that it was up to the unelected toll authorities in 2042 whether or not to keep the tolls in place once the debt is paid off. Pickett rightly emphasized those boards will always have some excuse to keep the tolls going.

Pickett also put TxDOT on notice that the committee wants a full accounting of toll projects that include any sort of non-compete agreement. Such provisions common in public private partnerships penalize or prohibit the state from building ‘competing’ roads (whether tolled or not), like SH 130  segments 5 & 6 where the state has to compensate the private toll operator for any potential loss in toll revenues.

‘System financing’ ties our hands
He also cautioned that by intertwining the financing of toll projects together, known as system financing, that TxDOT and toll agencies have built a system ‘too big to fail.’ They already use it as an argument that tolls can’t be removed from SH 130 because the financing for Loop 1 and SH 45 are part of a system dependent on its toll revenues. That’s by design. The financiers and toll bureaucrats knew the public would call for the tolls to stop, so they co-mingled all the financing together so that they’d be able to say they couldn’t extricate one from the bunch in order to keep the tolls in place indefinitely.

Up until now, arguments in favor of toll projects have been all about the money – how much road you can build if you leverage cash with debt, or how much faster the road can be built by borrowing versus waiting for traditional funds to be available. Pickett turned that thinking on its head, yesterday, by asking all projects to be analyzed based on all factors, not just financial ones.

“Right now, it’s all been about the money…I want to know how much traffic is impacted and how their level of congestion has been improved…not just the money,” Pickett urged. “While these are regional and local decisions, most of this is on the (state highway) system, so we (the state) have some culpability for this.”

State Representative Ron Simmons pointed out his constituents are surrounded by toll roads with more coming online, and yet they pay gas taxes, too, generating an estimated 900 million miles traveled (which produces roughly $18 million a year in gas taxes). He wants local elected officials to be held accountable for these decisions that amount to new taxes on driving.

Simmons ultimately asked, “How do we get out of this malaise?”

Thankfully, Pickett, who authored the bill HB 2612 last session, is getting a plan in place to do exactly that.

Terri Hall is a citizen activist who founded the statewide group Texas TURF (Texans Uniting for Reform and Freedom) when she learned that TxDOT was to convert her only access to San Antonio, Hwy 281, into a tollway (which is a double tax to charge taxpayers again for what they’ve already built and paid for) and when she saw a major shift in Texas transportation to tolling our existing freeways.  She has worked in two sessions of the Texas Legislature, spoken before 12,000 people at a rally in Washington D.C., organized marches on Austin, spoken at national conferences, appeared on both the Lou Dobbs Show, CNN’s American Morning, and Fox News nationally, and done local radio & TV interviews all over Texas. She also writes for the Express-News and Houston Examiner and has had many columns published by news outlets nationwide.  This article appeared at:  http://www.texasturf.org/2012-06-01-03-09-30/latest-news/2174-chair-wants-tolls-to-come-off-says-tolls-cause-congestion