They Strap A Camera To An Eagles Back And…Whoah! [VIDEO] 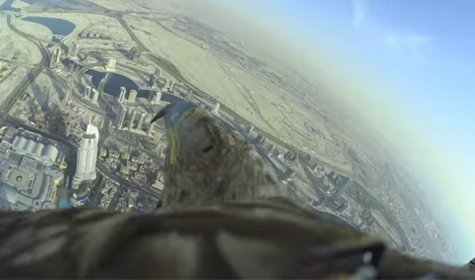 The YouTube Channel New Tang Dynasty has an awesome video.  It is of a rare imperial eagle flying from the top of the world’s tallest building in Dubai, UAE, straight to its falconer’s arm.  In the video the camera captures the stunning world record attempt to raise awareness for endangered species.  From their YouTube Page:

A stunning video captured the moment a rare imperial eagle flew from the top of the world’s tallest building in Dubai, UAE, directly to its falconer’s arm in a world record attempt on Saturday.

The breathtaking stunt was captured on a camera strapped to Darshan, an imperial eagle.

In the video the bird can be seen soaring high above the Dubai skyline, before spotting its trainer, falconer Jacques-Olivier Travers, standing in a red square marked in the ground.

The event was organised by conservation movement Freedom Conservation which works to protect and reintroduce threatened birds of prey.

It was founded by Jacques-Olivier Travers who breeds rare birds in Thonon, France.

Freedom Conservation claimed it had set a new world record in the flight.

The event was staged to draw attention to the need to protect endangered birds. The imperial eagle was once on the Red List of endangered species but numbers have increased through global conservation programmes.

Freedom Conservation said it hoped Darshan could now act as an ambassador for endangered animals all over the world.

Watch below for the breathtaking footage of this beautiful creature’s flight:

If you wish to watch the full five minute flight you can click HERE.

Reflections Of A Texas A&M Livestock Judging Team All American