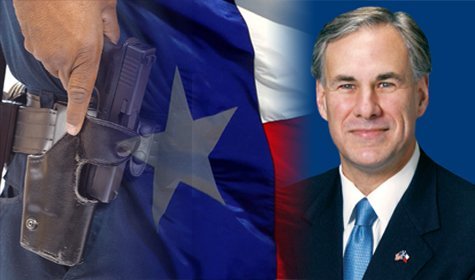 A signature from Gov. Greg Abbott is all that remains before a bill allowing Texans to carry their handguns openly becomes law.

After a week of hand-wringing over a controversial amendment — and what proved to be empty threats of a Democratic filibuster — the measure sailed through both chambers of the Legislature on Friday afternoon. The vote in the House was 102 to 43; in the Senate, 20 to 11.

House Bill 910 from state Rep. Larry Phillips, R-Sherman, would allow license-holders to carry handguns openly in a hip or shoulder holster, changing current law requiring that such weapons be concealed.

Gun rights activists pushed fiercely for the legislation this session — some even arguing that it did not go far enough because it did not repeal handgun licensing requirements altogether.

The bill encountered opposition from law enforcement officials and public safety groups, who said it would endanger the lives of police officers and the communities they protect.

Last week, the bill’s passage was temporarily delayed when the Senate unexpectedly revived a provision that would limit the power of police officers to ask those carrying handguns visibly for a permit.

The so-called “cop stop” amendment had support from some Democrats who said it would help prevent racial profiling, as well as conservatives who said it was necessary to protect the public against unreasonable searches and seizures. But it stirred vocal criticism from the state’s police chiefs, some of whom held an impromptu news conference at the Capitol to urge Abbott to veto the bill if the language stayed in.

State Sen. Rodney Ellis, a Houston Democrat who supported the “cop stop” provision but opposed the legislation as a whole, told the chamber shortly before Friday’s vote that he wished law enforcement had used its “collective strength” to oppose the entire bill, rather than aligning at the last minute to fight an amendment.

Before the bill passed the House, state Rep. Harold Dutton, the Houston Democrat who originally crafted the amendment, made a final unsuccessful plea to keep it in.

“I’m disappointed that the amendment didn’t stay on, but it’s still the law, nonetheless,” he said of how police officers can only stop those who are engaged in unlawful conduct. “I expect law enforcement to follow the law and we’ll be watching to see to make sure they do.”

But lawmakers ultimately voted not to keep the amendment. Phillips said he was convinced police officers would be properly trained in the new law.

“We will be doing a diligent effort to make sure that law enforcement is educated about this very topic,” he said.

Since shortly after he was elected in November, Abbott, a Republican, has said he would sign any open carry bill that reached his desk.

Just minutes after the final vote in the Senate, he tweeted: “Open Carry just passed in both the Texas House & Senate. Next destination: My Pen.”

Article written by by Morgan Smith, The Texas Tribune.  Original Article at:  http://www.texastribune.org/2015/05/29/open-carry-bill-heads-gov-greg-abbott/