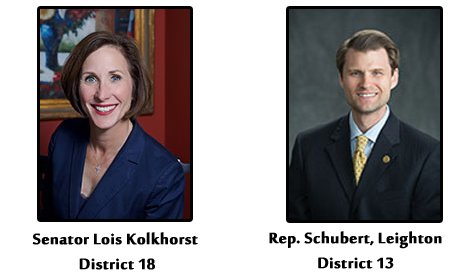 Both Texas Senator Lois Kolkhorst and State Representative Leighton Schubert released a joint press release making it clear their feelings on the proposed composting facility that is to be built on Austin County.

The press release is dated Thursday February 25, 2016 with the following:

“On behalf of the citizens of Austin County and the Cities of Sealy, San Felipe, and Brazos Country, Senator Lois Kolkhorst and Representative Leighton Schubert express their opposition to SouthWaste Disposal’s application for a new municipal solid waste composting permit at the intersection of Bartlett Road and Brazos 10 Lane, Sealy, Austin County, Texas 77474.

“This proposed facility will negatively impact one of the most historic portions of Texas. The disposal company applying for the waste permit intends to process millions of gallons of odorous liquid waste every month. The smell from this project will decrease property values in the Cities of Brazos Country, San Felipe and others as well as other rural developments,” said Kolkhorst. “As most Texans are aware, San Felipe was the center of Stephen F. Austin’s Colony in 1823 and was considered the first unofficial Capitol of Texas, only a short distance from the proposed waste site. Through the efforts of many local citizens for several years now, we have worked to secure state funding for a new visitor center and museum at the San Felipe de Austin Historic Site. This waste site is misplaced and could negatively impact future tourism efforts.”
“The people of Austin County have spoken loud and clear that they do not want this facility near their communities. It’s negative impact would be felt for years to come and I join with my constituents in opposition to this proposed project,” said Schubert.”

The release is a follow-up to Austin County as well as the municipalities that surround the proposed site filing resolutions against SouthWaste Disposal, LLC’s proposed solid waste compost facility.  (You can watch Austin County’s meeting HERE and you can watch Sealy’s meeting HERE)  The construction for the facility is slated to begin once the necessary TCEQ permitting has been completed.  A request has been filed for the TCEQ to have public hearings on the proposed site and its permit but, no dates have been released yet.  You can read the original press release by clicking HERE.