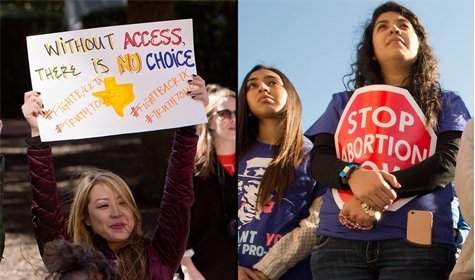 Before Wendy Davis took to the floor of the Texas Senate for an 11-hour filibuster that ultimately failed to stop sweeping new restrictions on abortion, there was Casey.

Shorthand for Planned Parenthood v. Casey, the 1992 U.S. Supreme Court case reaffirmed a woman’s right to an abortion but gave states more power to restrict the procedure to “further the health or safety of a woman.” The 5-4 ruling, however, also said states can’t enact “unnecessary” regulations that have the “purpose or effect” of imposing an undue burden on those seeking the procedure.

On Wednesday, the court is expected to revisit the standards set by Casey — and potentially redefine the next era of abortion restrictions in the United States — when it takes up a legal challenge to Texas’ 2013 abortion restrictions, collectively known as House Bill 2. The Texas case, formally known as Whole Woman’s Health v. Hellerstedt, will allow the court to address disagreements among lower courts over what constitutes an undue burden and clarify how far states can go in restricting abortion.

It’s the next step of a legal journey that began in Texas when lawmakers passed HB 2 almost three years ago. The law requires abortion clinics begin to meet the same standards as hospital-like ambulatory surgical centers, which range from minimum sizes for rooms and doorways to the number of nurses required to be on staff. A separate provision requires doctors who perform abortions to have admitting privileges at a hospital within 30 miles of an abortion clinic.

Only 19 Texas clinics remain of the more than 40 that were open before HB 2 passed, and the restrictions are blamed. If the Supreme Court upholds the abortion law in its entirety that number could fall to less than 10, all in major metropolitan areas.

“There will be a right in name as long as Roe is still on the books, but if there are no clinics, then what does that really mean in terms of the right to abortion if you can’t exercise the right?” asked Cary C. Franklin, a constitutional law professor at the University of Texas at Austin. “This case really puts that question front and center.”

Two questions get to the heart of the biggest abortion case the nation’s highest court has taken up in almost a decade: Do the new Texas restrictions place so much burden on women seeking the procedure that they’re effectively denied a constitutional right? And are the courts allowed to question the motives of the GOP-controlled Legislature that passed the laws?

The abortion providers suing Texas argue that the restrictions create an undue burden for women who would have to travel more than 150 miles to the nearest abortion facility, and do not actually advance the state’s interest in promoting health.

The Texas attorney general’s office argues that the restrictions are constitutional, reasonable measures meant to improve women’s health that do not create an undue burden for a majority of women seeking the procedure.

So far, the lower courts have split on the constitutional question. In 2014, U.S. District Judge Lee Yeakel of Austin struck down both provisions. The state immediately appealed to the U.S. 5th Circuit of Appeals, which in June upheld most of its provisions.

The appellate court did carve out an exception from most of the hospital-like standards for the relatively remote Whole Woman’s Health clinic in McAllen, and granted one of the McAllen clinic’s doctors relief from the admitting privileges requirement.

Opponents also argue that courts should consider whether anti-abortion Texas lawmakers are hiding behind health arguments to advance their political aim of discouraging the procedure as much as possible. Since the Casey decision, the state has passed a series of increasingly restrictive measures, including mandatory sonograms and waiting periods.

Some courts have ruled that lawmaker intent should be weighed, but in its ruling the 5th Circuit struck out on a different path, rejecting the notion that legal precedent requires courts to scrutinize the facts state legislatures use to justify health-related abortion restrictions.

“The 5th Circuit says that courts can’t examine the facts that justify abortion restrictions, and must simply defer to the legislature,” said Reva Siegel, a law professor at Yale University. “Other circuits disagree and emphasize that courts must review the facts that justify legislation restricting exercise of a constitutional right. That’s the question the Supreme Court will be addressing in this case.”

Courts tend to defer to legislatures on economic and social matters using a less strict form of judicial review known as the rational basis test, said John Robertson, a law professor at UT-Austin who focuses on bioethical issues, including reproductive rights.

Attorneys representing the coalition of abortion providers suing the state argue that legal precedent gives courts the duty of scrutinizing the medical rationale lawmakers cite in enacting abortion restrictions, pointing out that major medical groups have come out against the Texas abortion law.

“The Supreme Court has made clear that it and other courts have an independent obligation to ensure that laws that restrict access to abortion are justified,” said Stephanie Toti of the Center for Reproductive Rights, who will be arguing before the high court.

Texas attorneys contend that courts should not second-guess the intentions behind the Legislature’s push for abortion restrictions, particularly when medical opinion is split.

“A lot of people sort of want to draw this into the life debate, and the reality is that this goes to our ability as Texas to set the health standards that we think are appropriate for women’s health and beyond,” said Chip Roy, first assistant attorney general.

All eyes on Kennedy

Like many cases before the high court, the decision is expected to come down to Justice Anthony Kennedy.

In Casey, Kennedy was one of three judges who wrote the majority opinion, upholding the right to abortion but granting states more power to restrict the procedure under the undue burden standard. Using that standard, the court upheld a 24-hour waiting period and mandatory parental consent for minors, among other restrictions, but it struck down a requirement that would have required married women to notify their husbands before obtaining an abortion.

Kennedy revisited the issue in 2007 in Gonzales v. Carhart, in which the court upheld the federal Partial-Birth Abortion Ban Act outlawing a specific method used in late second-trimester abortions. Though Kennedy sided with the restrictions, the majority opinion in the case reiterated that courts maintain “an independent constitutional duty to review factual findings where constitutional rights are at stake” and the deference to lawmakers’ factual findings is “inappropriate.”

At a minimum, Kennedy has indicated his interest in revisiting the questions behind the undue burden standard; whether he means to reaffirm it or redefine it remains unclear. In June, he sided with the court’s four liberal justices to delay enforcement of the abortion restrictions as the case went through the appeals process.

The high court’s ruling, expected sometime this summer, could be felt across the country where other states have moved forward with similar abortion restrictions — some of which are also tangled up in court.

As of last November, 10 states had adopted admitting privileges requirements, but courts blocked enforcement in six of those, according to the Center for Reproductive Rights. Six states had enacted ambulatory surgical center standards on abortion facilities, but those restrictions were blocked in two of those states.

With oral arguments approaching, the legal and reproductive rights communities were poised for a landmark decision in the Texas case. But after Justice Antonin Scalia was found dead of natural causes at a Texas hunting lodge Feb. 13, that prospect became less certain.

If Kennedy sides with the court’s conservatives, the resulting 4-4 tie would have major implications for Texas because it would effectively affirm a lower court ruling that largely upheld the abortion restrictions. That would leave open only 10 clinics in a state with 5.4 million women of reproductive age — some living hundreds of miles from the closest abortion clinic in the state.

But it would also sidestep setting a national precedent by clarifying underlying legal questions and resolving conflicting rulings in the lower courts. Still, it would leave open the possibility for one side to claim victory in a later challenge.

The abortion providers could request a rehearing of the case, which is due 25 days after a ruling is handed down. A political power struggle in Washington leaves unclear when the vacancy on the court will be filled.

There are also a handful of lawsuits challenging similar restrictions in other states, and the legal issues in question are sure to make their way back before the high court, experts say.

“It wouldn’t help the Texas plaintiffs,” Robertson said. “But it still would leave that issue open.”

Disclosure: The University of Texas at Austin is a corporate sponsor of The Texas Tribune. A complete list of Tribune donors and sponsors can be viewed here.

This article written by Alexa Ura and Lauren Flannery, originally appeared in The Texas Tribune at: http://www.texastribune.org/2016/02/28/abortion-rulings-texas/.