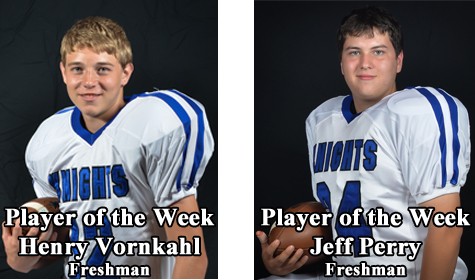 The Knights scored on the first play of their first three possessions.  The first was a hand-off from Jake Ewing (Hempstead) to Troy Herring (Bellville) for a 53 yard touchdown run.  The PAT was successful when Herring found Tyler Fontenot (Bellville) in the back of the end zone.  The second was another Ewing hand-off to Herring for 70 yards.  Herring spotted Will Woods (New Ulm) for the PAT.  The third was a Cameron Crawford (Bellville) 45 yard pass to Fontenot.  The Knights PAT was unsuccessful.  The Knights had a comfortable lead at the end of the first quarter 20-0.

In the second quarter, the Knights scored three more touchdowns.  The first was on a Ewing 24 yard touchdown run with a failed PAT.  The second was a 45 yard pass from Crawford to Fontenot.  Herring made the 2 point kick conversion.  The third touchdown was on a 27 yard pass from Ewing to Herring.  The PAT was no good.  At the half, the score was 40-0.

The Knights opened the second half scoring on their first possession.  On the second play Ewing scored on a 31 yard run.  This made the score now 46-0, which put the mercy rule into effect.

The Knight defense also played great allowing only 10 offensive plays for the Victors in the first quarter.  The defense held them on their first two series to 3 plays and a punt.  On the third series, the Victors turned the ball over on downs.  The Knights defense had 7 tackles for loss of yardage.  The defense was led by Jake Ewing with 7 tackles, Henry Vornkahl (Bellville), Jeff Perry (Bellville) and Will Woods (New Ulm) with 6 each, and Troy Herring  (Bellville) with 5.

The Knights records moves to 5-2 and 1-0 in district.  Their next game will be at home on Thursday, October 22 against Austin Veritas.