If Deficits Are This Huge Now, What Happens When the Recession Hits?

The Treasury Department released new budget deficit numbers this week, and with two months still to go in the fiscal year, 2019’s budget deficit is the highest its been since the US was still being flooded with fiscal stimulus dollars back in 2012.

As of July 2019, the year-to-date budget deficit was 866 billion dollars. The last time it was this high was the 2012 fiscal year when the deficit reached nearly 1.1 trillion dollars.

At the height of the recession-stimulus-panic, the deficit had reached 1.4 trillion in 2009. (The 2019 deficit is year-to-date): 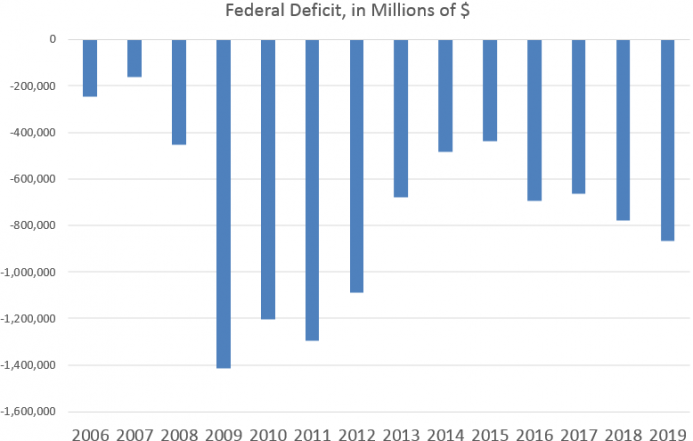 What is especially notable about the current deficit is that it has occurred during a time of economic expansion, when, presumably, deficits should be much smaller.

For example, after the 1990-91 recession, deficits generally got smaller, until growing again in the wake of the Dot-com bust. Deficits then shrank during the short expansion from 2002 to 2007. During the first part of the post Great Recession expansion, deficits shrank again. But since late 2015, deficits have only gotten larger, and are quickly heading toward some of the largest non-recession deficits we’ve ever seen. 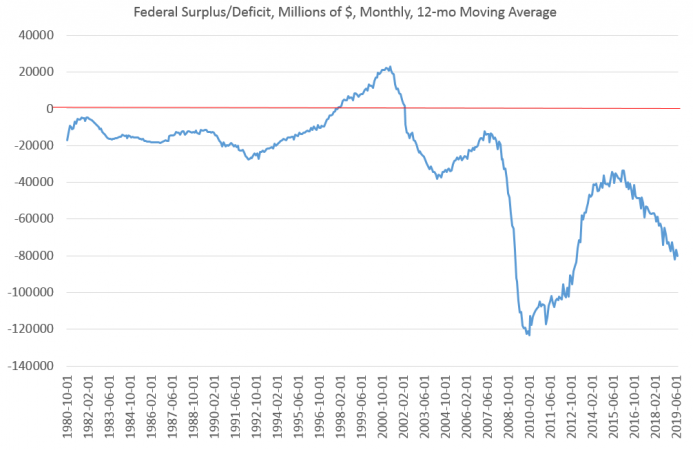 Meanwhile, federal revenue growth has fallen, with only one quarter out of the last eight showing year-over-year growth. 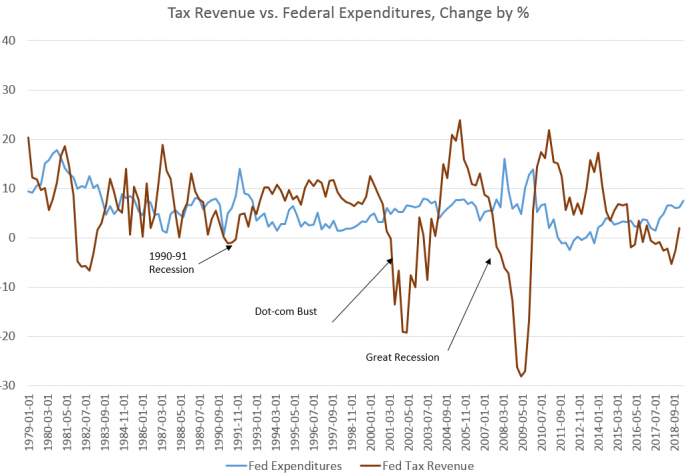 Historically, a widening gap between tax revenue and government spending tends to indicate a recession or a period immediately following a recession. We saw this pattern during the 1990-91 recession, the Dot-com recession, and the Great Recession.

Of course, if tax revenues actually limited government spending, there wouldn’t be much to complain about. Lower revenues really would mean fewer resources flowing into government coffers — and that can be a good thing.

But, in a world where government borrowing allows spending to balloon even in times of falling revenue, we’re setting the stage for future problems. The more the total national debt rises, the more debt service will become a serious issue if interest rates increase even moderately. Given the prospects for higher interest rates in the future, the Congressional Budget Office estimates interest payments on the debt will increase substantially in the future: 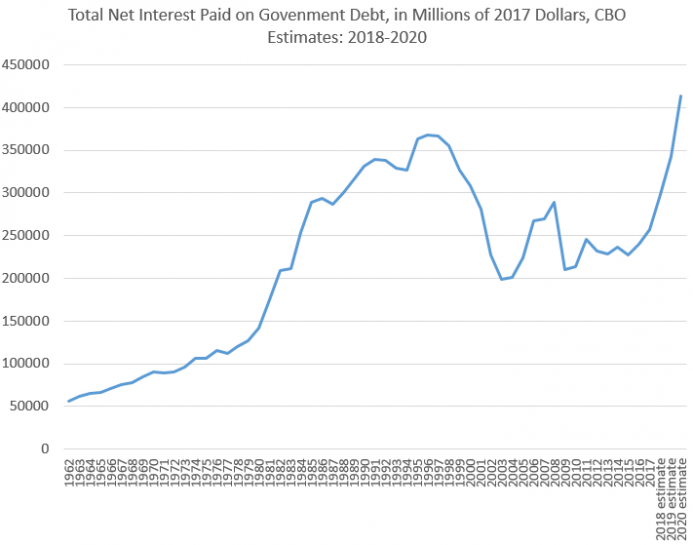 It is troubling that after a decade of an economic expansion, the US government is still spending money as it does during and immediately following a recession. Thus, if deficits are this large right now when times are good, how big will they become when the US enters recession territory? Back in 2009, the recession and its aftermath (i.e., massive amounts of stimulus) drove deficits beyond the trillion dollar mark four years in a row. With 2019’s deficit total now pushing toward 900 billion, we should perhaps expect deficits to top two trillion when the next recession hits. And probably for several years.

The piper will then need to be paid when interest rates increase and substantial cuts must be made to social security, medicare, and to military budgets in order to service the debt and avoid default.

The central bank won’t be able to simply buy up debt at will anymore, interest rates will rise, and Congress will have to make choices about how many government amenities will be cut in order to pay the interest bill. Americans who live off federal programs will feel the pinch. State governments will have to scale back as federal grants dry up. The US will have to scale back its overstretched foreign policy. Not all of this is a problem, of course. But lower-income households and the elderly will suffer the most. Everything may seem fine now, but by running headlong into massive deficits even during a boom, the feds are setting up the economy for failure in the future.

But that’s in the future, and few lawmakers in Washington are worried about much of anything beyond the next election cycle.

This article appeared at the Mises Wire at:  https://mises.org/wire/if-deficits-are-huge-now-what-happens-when-recession-hits