Government Exceptions to the 4th Amendment; Where Are They? 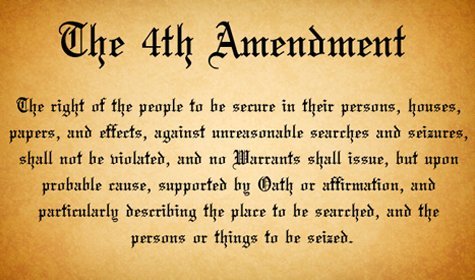 Judges these days seem just fine with allowing the government exceptions to the 4th Amendment. That doesn’t surprise me, I went to law school.

According to the 4th Amendment we are not free from ALL search and seizures, just UNREASONABLE ONES. But the term “unreasonable” is no mystery. It is clearly defined within the 4th Amendment.

The right of the people to be secure in their persons, houses, papers, and effects, against unreasonable searches and seizures, shall not be violated, and no Warrants shall issue, but upon probable cause, supported by Oath or affirmation, and particularly describing the place to be searched, and the persons or things to be seized.

A careful review of the 4th Amendment tells us everything we need to know.

The right against unreasonable searches and seizures SHALL NOT BE INFRINGED.

There is clearly a 5 prong requirement as indicated by the word “AND”. You cannot have 4 out of 5 or 3 out of 5 and still have a reasonable search and seizure.

I challenge anyone to find within this language any other exception other than the 5 prong test. You can’t, because every exception that doesn’t exist within the 4th Amendment itself, is an exception created BY THE GOVERNMENT for the purpose of AIDING THE GOVERNMENT in their unreasonable searches and seizures.

There is no language in the 4th Amendment that says;

“no Warrants shall issue, but upon probable cause, supported by Oath or affirmation, and particularly describing the place to be searched, and the persons or things to be seized, UNLESS it is a matter of national security or the government has a compelling interest in safety or security to do otherwise.”

Yet, that is what our judges consistently do, being either illiterate or ignorant to the TRUE MEANING and APPLICATION of the 4th Amendment.

The 4th Amendment WAS NOT designed as a tool to be used by the GOVERNMENT to keep its people safe. It was a WARNING to the PEOPLE that if the government engages in ANY SEARCH AND SEIZURE outside these bounds, you have an EVIL AND OPPRESSIVE government.

Such warrantless searches were perpetrated upon our founders in the form of Writs of Assistance. James Otis, Jr., an attorney who took on the government to defeat these searches, called these searches “the worst instrument of arbitrary power, the most destructive of English liberty and the fundamental principles of law, that ever was found in an English law-book.” (Against Writs of Assistance, James Otis, Jr. February 24, 1761)

What has happened to Liberty in the last 252 years? We have allowed our FEAR to trump our LIBERTY. Our founders worked very hard to create a federal government that would be locked in a limited and defined box. We, their descendants, have turned around and handed the government the keys.

“Necessity is the plea for every infringement of freedom. It is the argument of tyrants. It is the creed of slaves.” No truer words were ever penned by William Pitt. However, here we are today accepting the government’s argument of necessity. Out of ignorance and arrogance, fueled by fear, we do not see they are revealing themselves to be tyrants and we are allowing OURSELVES to be slaves.