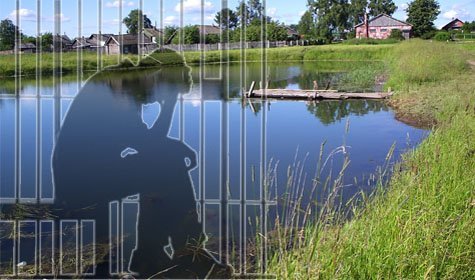 If someone were to ask if you could go to jail for digging a pond or even several ponds on your own property, most of us would laugh at that notion.  Well, you better stop laughing because it has happened.  Disabled Navy Veteran Joseph Robertson, 77, of Basin Montana was convicted for violating the Clean Water Act and now faces prison and hundreds of thousands in fines which will most likely result in the forfeiture of his land.

Mr. Robertson’s story begins when multiple fires in the area over the years spurred him to improve his property by building stock ponds for his animals and for fire prevention for his and the neighbor’s property.  He dug 9 ponds in total over his 200-acre property.  The government now contends that his nine stock ponds affect approximately one-tenth (1/10) of an acre of discharged pollutants going into the Jefferson River nearly 60 miles away.

Mr. Robertson had a court appointed attorney (Michael Donahoe) whose group (the federal defenders) had commissioned an environmental impact report which detailed how Robertson did NOT violate the law.   A second, nearly identical, report documented by Kagel Environmental, LLC showed that Robertson actually improved the land and could not have contaminated any US waters.  (Click HERE to read Kagel Environmental’s Report)  Kagel’s Conclusion stated:

As a certified professional wetland scientist, former COE federal regulator, and a federal enforcement officer specializing in Section 404 Clean Water Act jurisdictional determinations, KE found powerful evidence that the approximate 1/10 acre of total discharge into alleged wetlands associated with the nine (9) small ponds is not waters of the U.S.

The report goes on to explain that KE’s professional wetland scientists failed to identify where the EPA had any federal jurisdiction under Section 404 of the Clean Water Act (i.e. no violation) and also failed to:

which were located adjacent to Mr. Roberton’s property.  They further went on to explain that:

“Please note, Mr. Robertson, that even if your work had occurred in regulated waters of the U.S. in accordance with the written opinions of Justice Scalia and Justice Kennedy in their decision in Rapanos, such a relatively tiny amount of discharge into wetland areas 0.11 acre, would have already have been authorized by one or more existing Section 404 nationwide permits, and the government would have considered the discharge to be so insignificant that it would not have even required any compensatory mitigation unless the COE decided it was necessary to compensate for 1/10th of an acre.”

Now, this is where the story takes a turn into the bizarre.  The public defender, Michael Donahoe, failed to use either his own firms commissioned study or KE’s study as evidence to defend Mr. Robertson.  He instead decided to rely on the EPA’s study stating that the EPA was the expert testimony, and he would rely on their report (which showed Robertson as guilty).

Mr. Kagel of Kagel Environmental, LLC even offered to testify on Robertson’s behalf but Donahoe declined only allowing EPA officials to testify as expert witnesses.  Adding an even stranger ingredient to the mix was bringing Judge Donald W. Molloy, a judge retired since 2011, out of retirement specifically to hear this case.  This is compounded by the fact that Molloy was the subject of a complaint letter that Robertson had filed some years earlier.

If you would like additional information concerning this case, you can go HERE to read more about it.  You can also listen to Constitutional Attorney KrisAnne Hall’s podcast on the subject below:

(NOTE:  The first part of the podcast discusses federal judges and federal cases.  The discussion of Mr. Robertson’s case begins at the 21:34 part of the show.)