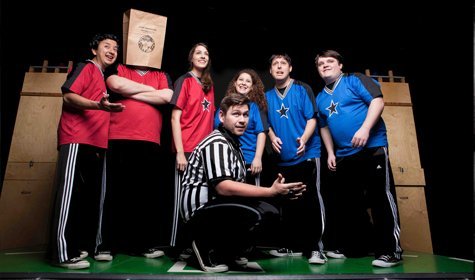 Similar to a sports-themed “Whose Line Is It Anyway,” ComedySportz features a referee, an announcer and two comedians on each team. As the game begins, the performers will ask the audience to suggest situations, songs, names and more. Playing to the local crowd, ComedySportz’s professional comedians will tailor some of their humor to Blinn College, Blue Bell and Brenham.

The ComedySportz Road Show has been performing around the world since 1984. The interactive show is not about sports, but is instead comedy played as a sport, complete with a referee, uniforms and exciting competition. Because every scene is created on the spot, no two shows are alike, as the audience yells suggestions for scenes and decide which players earn points. Some fans even get to join the pros on the field, and the show is always suitable for all audience members.

Tickets are $10 apiece ($8 each for group sales of 10 or more), and are available at www.blinn.edu/boxoffice or by emailing [email protected]. Proceeds benefit the Blinn College Foundation, and doors open at 6:30 p.m.

In addition to the public show, ComedySportz will host a private workshop with close to 20 Blinn theatre majors, going over the rules and finer points of improvisational comedy.

The Blinn Foundation supports programs and activities that enhance the quality of education for Blinn College students and expand the educational opportunities for the entire community. While raising funds is an important function, the Foundation also seeks to heighten community awareness of the mission and accomplishments of the College and to promote excellence in education.

Since its inception in 2000, the Foundation has raised more than $13 million for Blinn. Those funds have been used to help launch major construction projects across Blinn’s campuses, including the A.W. Hodde, Jr. Technical Education Center, the J. Hal and Allyne Machat Music Facility, the W.J. “Bill” Rankin Agricultural Complex and the Bert and Mae Dean Wheeler Residence Hall. An additional $1 million has been spent purchasing classroom equipment and supplies requested by Blinn faculty.

For more information on the Foundation and its mission, call 979-830-4107 or visit: www.blinn.edu/foundation.

Citizens of Wallis Concerned Over Opening Of Immigrant Housing Facility