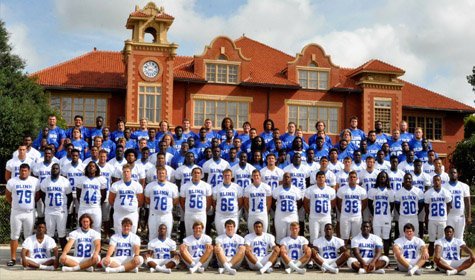 Even after 35 years of coaching high school and college football, the draw of the gridiron was too much for Keith Thomas.

After two years spent as Blinn College’s judicial officer and director of housing, the former tight end who won two national championships playing tight end for Barry Switzer’s Oklahoma Sooners is back where he belongs – on the football field.

“It was tough hearing that whistle on the practice field and not being out there,” Thomas said. “I thought it would be great going home at 5 and getting to watch Texas A&M games, but I’m back to my love and what I like to do.”

Thomas said he anticipates spreading the field to take advantage of the Buccaneers’ talented quarterbacks and receivers, but his top priority has been instilling the values and discipline he expects of a team representing Blinn College.

“I’ve had 95 kids here this summer and not one has gotten in trouble,” Thomas said. “I hope Brenham and the college community get behind these kids because they’re doing the right things. I don’t know how many games we’ll win, but we’ll play with class and represent Blinn well.”

Of course, an exciting brand of junior college football should also draw crowds.

Quarterback Garry Kimble and running back Klartel Claridy have graduated, but the Buccaneers return their top receiver in Darrion Landry, a 6-foot-3 sophomore from Baytown Lee High School who caught 45 passes for 766 yards and five touchdowns last season.

Kaylon Melancon, second on the team with 22 receptions for 169 yards, also returns alongside Kyle Fulks, who caught 12 passes for 169 yards and a touchdown last season. Fulks, a former Baylor University commit, is a former state champion in the 100 meters.

At running back, the Buccaneers are excited about Devante Mays, a 230-pound running back who transferred to Blinn from Tyler Junior College.

“We’re hoping he’s one of the better backs in the conference,” Thomas said. “He was hurt all last year, but he looks like a Southeastern Conference back.”

“We’ve got some young kids and some redshirts we’re hoping can come through,” Thomas said. “We’re going to be really raw on the offensive line, but I think with what we’ve got, we have a chance to be all right.”

“I coached in this league for 13 years at Navarro College and I know you need a good defensive line to win,” Thomas said. “You’re going to have skill people, but where you win the ballgame is in the trenches. I think we’re going to be solid there.”

To round out the defensive line, the Buccaneers hit the recruiting trail in search of defensive ends, signing Tralund Webber, a 6-foot-5, 230-pounder who was named MVP of the Texas Class 3A championship game. Avery Jordan, the 6-foot-6, 260-pound little brother of Los Angeles Clippers center DeAndre Jordan, and Michael Wright, a 6-foot-4, 212-pounder from Cypress Creek, were also added to the rotation.

In the defensive backfield, the Buccaneers return Alan Wright, who ranked fifth on the team last year with 36 tackles and was tied for the team lead with two interceptions, and Scott Middleton, who recorded 32 tackles and one interception.