Blinn Women’s Basketball Enters the 2021 Season Ranked No. 16 in the Nation 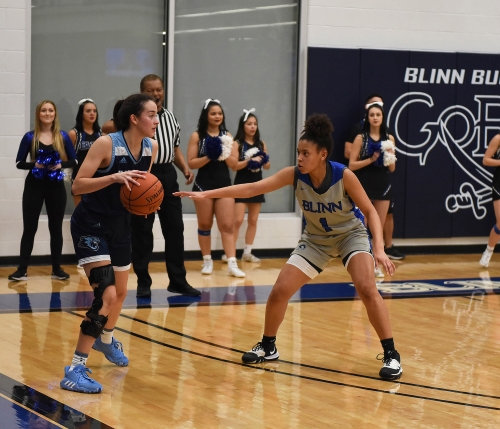 The No. 16 Blinn College women’s basketball team will bring athleticism and speed to the court in 2021. The Buccaneers return seven key players from last year’s 25-win season while adding one sophomore transfer and six freshmen.

“Our practices have been very aggressive and very intense, so I expect the team to jell this year and we should be fun to watch,” head coach Jeff Jenkins said. “We are fast, athletic, and this team is capable of winning a lot of games.”

The Buccaneers finished the 2020-21 season ranked 24th in the nation after posting a 25-7 overall record and 13-5 conference record. The Buccaneers defeated Paris Junior College 62-58 in the NJCAA Region XIV Tournament quarterfinals.

“Our seven returners played in nearly every game and combined for an average of 36 points per game last season,” Jenkins said. “They have a lot of experience playing in this region and know how to compete and show our freshmen how to compete. They are all good kids who play hard and have a great work ethic.”

“Atwood played 20-25 minutes per game and we always put her on the other team’s best offense guard,” Jenkins said. “She is a very competitive kid in practice and in the game, and will do everything it takes to win.”

Eddings played 32 games and averaged 4.8 points per game. She was third on the team with 41 steals and recorded 21 3-pointers.

“Eddings played in every game and is our quickest and most athletic player,” Jenkins said. “She can rebound and put the ball in the hole from the three-point line.”

Briauna Johnson played 28 games and started 19. She was fifth on the team with 51 steals and averaged 4.9 points per game.

“Briauna Johnson started a lot of games for us last year and is extremely skilled,” Jenkins said. “She is a great defender and takes charges.”

“Ah’Jaya brings a lot of energy and athleticism,” Jenkins said. “She can play multiple positions as far as the small forward or the big forward, and is always talking and always aggressive.”

Adrian played 19 games and started three. She was fifth on the team with 122 rebounds and averaged 6.4 per game, while averaging 4.9 points per game.”

“Adrian is 5-foot-9 and can play small forward or power forward,” Jenkins said. “She was our leading rebounder last year before she tore her ACL and has tons of energy.”

Soders started all 31 games she played in and averaged 17.6 minutes per game. She was third on the team with 19 blocks, and averaged 4.4 points and 6.3 rebounds per game.

“Jessica Soders started a lot of games for us last season and can play multiple positions,” Jenkins said. “She is 5-foot-11, and a good rebounder and defensive player.”

“Bowman also can play multiple positions, and plays with a lot of energy and hard,” Jenkins said. “She can hit the three, she can hit the 15-footer, and she can rebound.”

Sophomore Amanda Ferry (Houston) transferred from Temple College, where she played 28 games in 2020. She averaged 4.3 points and 3.1 rebounds per game for the Leopards.

“We have a solid group of freshmen who are starting to follow the positive examples of how to be good basketball players, good students, and good people from our returning sophomores,” Jenkins said. “They are getting excited to get in there and start competing.”

“We enter every practice, video session, and game to try to get better that day,” Jenkins said. “We understand that a basketball season is a marathon and not a sprint. We know that if we get better every day that it will translate into winning basketball games, and playing our best basketball at the end of the season.”

The 2021 season opens Saturday, Jan. 23, at 2 p.m. against Louisiana State University Eunice at the Jacksonville Classic.

“We want to go to the regional tournament with a chance to win three games and go to the national tournament in Lubbock,” Jenkins said. “Overall we have pretty good size and we plan on five people going to the boards every defensive possession so that we can push the ball in transition. We are going to be aggressive defensively and don’t have plans to slow down.”