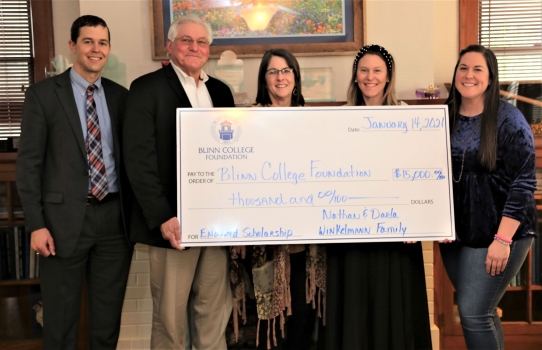 It isn’t difficult to see how Nathan and Darla Winkelmann feel about Blinn College. Their business is named after it.

The Winkelmanns recently gifted $15,000 to establish a new endowed scholarship in honor of their daughters Courtney and Carlee, both of whom graduated from Blinn.

After earning All-America honors for the Blinn Buccaneer football team and graduating from Blinn in 1975, Nathan Winkelmann turned down a host of scholarship offers. Instead, he purchased property at the corner of U.S. 290 and FM 389 in Brenham and opened Buccaneer Food Store. The store is located a few blocks from the Blinn-Brenham Campus.

“We have longtime ties to Blinn,” he said. “Even the name of my business was named from that, not just because we’re in close proximity to Blinn, but because it’s been a big part of my life.”

“As life has gone on, I’ve had a lot of opportunities to give back some of the things that were given to me,” Winkelmann said. “My wife and I always thought that if the opportunity ever presented itself financially, we want to do whatever we could to do more.

“Being on the Foundation board really opens your eyes to see all the good things Blinn does. So many people don’t realize how valuable Blinn is to the educational system after high school. Blinn College allows students to experience two years of college while getting their basics before attending a major university.”

“We’re just happy and honored to be able to do this, and in turn honor our daughters. They both had good experiences at Blinn.”

Carlee was a pitcher on the Blinn softball team, earning National Junior College Athletic Association All-America honors in 2009. Courtney was an education major at Blinn and member of the College dance team.

The scholarship will be earmarked for education majors and members of the softball team.

“It’s gratifying when former students come back and establish endowed scholarships,” said Sam Sommer, Blinn Foundation Board Chair. “They know the importance of a good education, and their help in providing scholarships is vital to many students.

“The Winkelmanns’ scholarship has special meaning because of their longtime ties to Blinn. We truly appreciate their gift, which will help students for generations.”

The Blinn College Foundation offers more than 200 endowed scholarships that are available to incoming and returning students from a wide range of backgrounds, majors, and experiences. The tax-exempt organization also provides financial support for programs and activities that enhance the quality of education for Blinn students and expand educational opportunities. The Foundation also looks to heighten community awareness of the mission and accomplishments of the College and to promote excellence in education.

More information on funding an endowed scholarship or applying is available at www.blinn.edu/foundation or by calling 979-830-4017.

Current high school and college students can apply for all Blinn scholarships through a single application at www.blinn.edu/scholarships. Prior to applying for scholarships, students must complete their application for admission to Blinn College at www.applytexas.org.