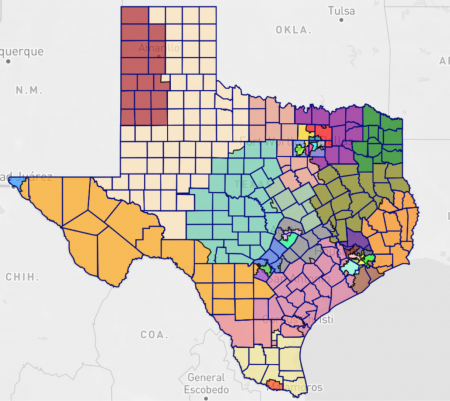 The Committee had planned to hold in-person regional hearings across the State over the legislative interim to solicit public input on redrawing Texas electoral districts after the 2020 Census. Due to COVID-19, those hearings could not go forward as scheduled. When the Senate convened last week, it unanimously adopted Senate Resolution 4, which says that the Committee can hold these region-focused hearings in the Capitol, with public testimony provided via videoconference. This is a substitute for the Committee traveling the State to solicit this input in person, as it has in past redistricting cycles.

“I look forward to hearing from Texans in every part of the State about their communities as we prepare to redistrict using the data from the 2020 Census,” said Senator Joan Huffman, Chair of the Committee. “The pandemic has presented new challenges for all of us, but it will not prevent the Senate Redistricting Committee from soliciting input from Texans about their local communities–especially about local and regional considerations related to redistricting. This input will assist the Legislature in the critical task of redistricting.”

Although the regional hearings are organized around particular regions and population centers, the Committee will hear testimony about any part of the State at any hearing. “We encourage all Texans and interested parties to make their voices heard in this process, and we look forward to meaningful and productive conversations at these hearings,” said Senator Huffman. “I am thrilled that Texans throughout our State have the opportunity to testify on this critical, once-per-decade process from the comforts of their own home, business, or school. Let’s talk Texas.” Members of the public may sign up to testify at https://bit.ly/3bWqH5b

A map of current districts can be found here.

Early Voting Has Started Iin Texas. Here Are Your Rights At The Polls.

Dallas, El Paso Veterans’ Facilities Will Get $442 Million In Upgrades