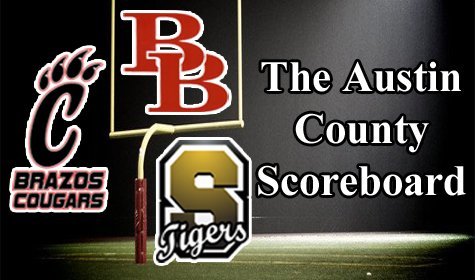 Austin County teams all battled Friday night against various teams.  The games are all pre-district games.  Pre-district games are essential to the rankings of the teams each win or loss moves the team up or down in state rankings for the season. The Bellville Brahmas played past district opponents the Giddings Buffaloes and won with a score of 35-21. This moved the Brahmas state rankings -56 to 349.  This leaves the Brahmas season at 2-1-0 The Brazos Cougars beat Schulenberg 28-21.  This moved the Cougars +138 to 663 in state rankings.  This leaves the Cougars season standing at 2-1-0 The Sealy Tigers played past district opponent Wharton and lost 14-13.  This moved the Tigers state Rankings +25 to 415.  This leaves the Tigers season standing at 1-2-0. All of the teams have wins and losses in their pre-district seasons.  Sealy’s biggest win came with a 61-0 win against the Brookshire Royal Falcons during the season opener.  The County has much to boast about with two teams ending week three with a two in their winning column. Next week Sealy and Bellville will meet at Tiger Stadium in Sealy for the Austin County Showdown.  The two teams have been rivals since football began in Austin County.  Brazos will play Rice Consolidated at Brazos.  All three teams have big seasons ahead of them.