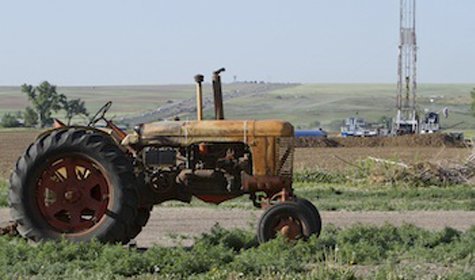 [Aman Batheja, The Texas Tribune Oct. 31, 2014] GLASSCOCK COUNTY — Dennis Seidenberger has farmed cotton for 49 years in this close-knit community 40 miles southeast of Midland. Farming is a way of life that he passed on to his son, and one that he  hopes will stay in the family for generations.

But his outlook has changed over the past three years as a surge in oil drilling has transformed Glasscock County, where he lives.

“They’ve totally ruined our way of life here,” Seidenberger said. “I don’t know if I’ll ever get over it.”

His sentiments sum up how many residents throughout the county view the drilling boom, despite the boost it has given to both the local economy and the county’s coffers.

“If something happened and oil went to $50 a barrel and everything moved out of here tomorrow, I don’t think it would hurt anybody’s feelings in Glasscock County,” said the county judge, Kim Halfmann.

One fact is crucial in understanding the anger toward the drilling that is pervasive among Glasscock County’s 1,251 residents: Most cotton farmers here do not own the mineral rights for the land that they farm. Under Texas law, the rights of mineral owners trump the rights of surface owners, meaning most Glasscock County farmers are powerless to stop energy developers from drilling wells, even as it destroys valuable crop land.

“I guess that’s what really irritates some of my producers: They’ve farmed this land for so many years, and basically someone shows up and says what they’re going to do with it,” said Jeff Turner, chief executive of the Glasscock County Co-Op Gin, a local farming cooperative.

Most landowners sold their mineral rights decades ago to raise money during lean years of farming, Turner said. At the time, few foresaw the frenzy of drilling activity that was to come.

“A lot of them sold those mineral rights to survive and to eat and to keep their land,” Turner said.

Between one-third and two-thirds of Texas farmers do not own the mineral rights under the land they farm, according to Darren Hudson, an agricultural economist at Texas Tech University.

“I know some farmers who have gotten filthy rich off the boom, but most of them don’t,” Hudson said. “If they don’t own the mineral rights, it’s more of an inconvenience.”

“In Glasscock County, oil and natural gas operators paid $6.1 million in property taxes in tax year 2013, which amounts to 84 percent of the county’s total property tax base,” Mamula said.

Halfmann agreed that the drilling boom has been great for her county’s revenue, but said most of that additional money is being used to repair roads damaged by oil field truck activity. Overall, the gains from drilling are not viewed as worth the drawbacks in a county long dominated by cotton farming.

“We don’t have a lot of businesses here, so we don’t have interest in a lot of economic development like a lot of these smaller West Texas towns are looking for,” Halfmann said. “We’re very satisfied with it the way it was.”

For every new oil or gas well, drilling firms take over a pad site of three to five acres and construct pathways — often through cropland — to a nearby road. All of that land will probably never be suitable for fertile farming again, said Norman Garza, associate legislative director with the Texas Farm Bureau.

Drilling companies often pay landowners to cover “damages” for a well. Several cotton farmers told the Tribune that a typical payment for a well site was about $10,000, an amount they were told was nonnegotiable, as state law did not require any payment to the surface owner.

“You’re kind of at the mercy of what they want to pay,” said Dennis Fuchs, a cotton farmer whose 640-acre piece of farmland has 16 wells.

He echoed several other farmers in describing the payments as insufficient to cover the loss of farmland and the hassle of maneuvering plows and other farming equipment around the well sites.

“If you have the minerals on it, then yeah, the damages are fine,” said Ronnie Hirt, one of the few Glasscock County cotton farmers who co-owns mineral rights on most of his farmland. “If the only income you get is the damages, they’re not nearly enough.”

Bill Mintz, a spokesman for Apache, one of Glasscock County’s most active drillers, said the company tries to treat farmers fairly, regardless of whether they own the mineral rights.

“Surface damage payments are the result of a commercial negotiation between the company and surface owner,” Mintz said. “We believe our offers are fair, in the context that we also need to be consistent across the area.”

The drilling activity has impacted the work and lifestyles of Glasscock County cotton farmers in several other ways.

The proliferation of trash from oil field workers is a particular source of frustration. Farmers spoke of empty plastic bottles, food wrappers and coat hangers piling up on well sites and scattering across their farmland, sometimes ending up mixed into cotton bales sold to mills.

“This community used to be pristine,” Fuchs said. “I can’t tell you how much trash I have picked up — like 30-gallon garbage cans of it.”

The drilling activity has also extended the time it takes to accomplish basic farming tasks. Farmers spoke of routinely spending double the time they used to for transporting farming equipment on county roads due to because of oil field traffic. Even a routine task like scheduling a visit from a crop-dusting plane became trickier. Because the chemicals used can be hazardous, farmers spoke of having to arrange with multiple energy firms to ensure no oil field workers are on the premises at the time.

“I deal with five oil companies on a daily basis,” Seidenberger said.

The influx of thousands of oil workers, many of whom stay in temporary housing facilities, has also been a sore point, particularly as it has contributed to a spike in traffic crashes.

“My accident rate has gone up fivefold since I took office five years ago,” Halfmann said.

Many farmers are selling groundwater to drillers. While the additional revenue eases some of the complaints about the drilling, some farmers fear they are contributing to the community’s permanent undoing. “If my water well goes dry, my house is worth nothing, and that’s a really big concern,” Hirt said.

Despite that concern, Hirt is still selling his water to drillers because he knows landowners living near him are doing the same from an aquifer they share.

“It’s still going to be depleted,” Hirt said. “It makes you feel like, well, you better get your part of it, or someone else will.”

A common theme among conversations with Glasscock County residents about the drilling boom was a feeling of powerlessness in a state where the widespread perception is that the oil and gas industry is unbeatable. Last year, the energy industry outspent farming interests by about 10-1 on lobbyists to the Texas Legislature, according to a report by Texans for Public Justice, a liberal watchdog group.

It is a bitter pill for Halfmann, who regularly hears of the concerns from farmers.

“County governments, we don’t have jurisdiction over any of the things that are going on,” she said. “It makes me feel like I’m not serving my constituency the way that I wish that I could, but my hands are tied.”

This article originally appeared in The Texas Tribune at http://www.texastribune.org/2014/10/31/county-resents-oil-drilling-despite-money-it-bring/.