Wave Power Could Supply Half the U.S. With Cheap Electricity—Here’s Why It Doesn’t [VIDEO] 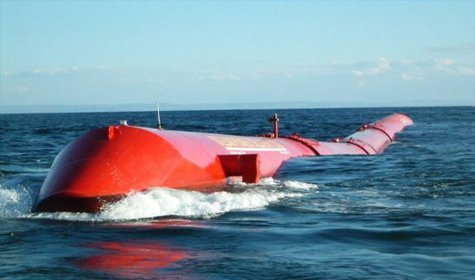 Think of a constant force in nature (gravity doesn’t count)—does the ocean come to mind? The unrelenting sea, with its perpetual ebb and flow, remains one of the world’s largest untapped sources of renewable energy.

How large? The Electric Power Research Institute estimates the potential wave energy resource along the United States’ coastline at 1,170 terawatt-hours per year. That sounds like a lot, and it is—enough to supply half the United States’ annual electricity demand.

A new study has found what scientist already thought. Wave energy production, once the infrastructure is in place, would be a reliable, steady, and dependable source of electricity—even cheaper than wind power, said Ted Brekken, a renewable energy expert at Oregon State University and coauthor of the study.

Waves are cheaper than wind? That’s saying something, considering that both wind- and solar-power costs are dropping so fast they’re now cheaper than energy production from coal and natural gas in many regions.

That’s because the undulation of waves from swells is a more consistent force than wind is over the course of a day. When the wind dies down or the sun ceases to shine, wind farms and solar power stations stop generating electricity, forcing grid operators to ramp up a coal- or natural-gas plant to keep the lights on. Waves, though, keep rolling 24-7, 365 days a year.

Looking at the cost of integrating wave energy into the Pacific Northwest’s current power grid, the study found that wave power would only cost $1.09 per kilowatt to integrate, compared with wind power, which costs about $1.20 per kilowatt.

“Putting wave energy systems in different locations and possibly with different types of technology would mean a power source with less variability than wind and one that should integrate easily,” Brekken said.

If it’s so powerful, cheap, and clean, why don’t we use waves?

Part of the reason is the energy source itself. The same powerful ocean forces that can generate constant electricity will also batter and corrode wave-energy devices 24-7. Developing a generator that can withstand the relentless pounding of the ocean without breaking the bank has been tough sledding.

The Scotland-based energy company is one of the few in the world that has put wave-energy devices in the water. Its red, snakelike generators made headlines in the aughts, with a handful floating off the coast of Portugal and some near Orkney, Scotland.

The design involved connecting five long floating tubes on the ocean surface that moved up and down or back and forth by wave motion. That movement was used to drive an electric generator inside each tube. Subsea cables carried the electricity back to shore. Each unit was capable of producing enough power to supply 500 houses, Brekken said.

Pelamis was converting sea waves into electric power for more than a decade when the company announced this past November its plans to shut down, claiming it couldn’t find funding to continue operating.

The reason? Both public and private sectors are unwilling to invest in wave energy, according to a November 2014 report from the Offshore Renewable Energy Catapult in the United Kingdom.

“There is a lack of willingness from potential investors to invest in wave and tidal energy at the moment,” the report stated.

OREC estimated it would take $300 million just to get Scotland’s wave-energy production up to commercial speed—much less the rest of Europe or the U.S.

“Since the global economic crisis, all of the wave-energy companies pushing forward in the early 2000s really took a step back and are licking their wounds,” Brekken said.

In the Pacific Northwest of the United States, it’s been one wave failure after another. In 2011, Scotland-based Aquamarine Power gave up its hopes to tap Oregon’s abundant wave-energy source, citing regulatory hurdles. In March 2014, a plan from Ocean Power Technologies to float 100 energy-producing buoys off the coast sunk under soaring costs.

Pelamis’ collapse was a big blow to Europe’s fragile industry. The Scottish Green Party blamed Scotland’s government for giving up on wave power and not putting enough public funding into the program’s development.

Others in the U.K. aren’t ready to give up just yet.

“Pelamis proved that wave energy works, so this has been a big setback,” Neil Kermode, managing director of the European Marine Energy Centre, told The Guardian. “But the prize of 15 percent of the U.K.’s electricity is still there. The challenge now: to ensure that this is the first generation to make the most of the waves that keep pounding the U.K. coastline.”

For Brekken, the study doesn’t promise cheap wave energy today, but once the infrastructure is in place, it can happen.

“It’s just a taxing and very large initial barrier for companies to develop the groundwork,” Brekken said. “The technology is there; it’s been proven. There’s nothing exotic about wave-energy-conversion technology itself—it’s just expensive to do stuff in the ocean.”