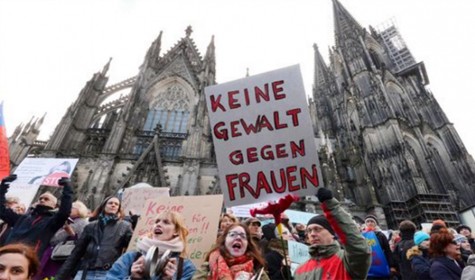 Update: the water cannons are out as is the tear gas:

Over the last several days, more information has come to light with regard to the wave of sexual assaults that occurred across Europe on New Year’s Eve.

What some observers initially assumed was an set of isolated attacks in Cologne’s city center now appears to have been a bloc-wide phenomenon as women from Austria, to Switzerland, to Finland come forward to report being accosted by what some police say were gangs of drunken Mid-East asylum seekers.

“In Sweden, police said at least 15 young women reported being groped by groups of men on New Year’s Eve in the city of Kalmar,” AP reports, adding that “in Finland, police said they received tipoffs on New Year’s Eve that about 1,000 predominantly Iraqi asylum seekers were intending to gather near the main railway station in Helsinki and harass passing women.”

“Women with or without accompaniment went through a literally ‘gauntlet’ by the heavily intoxicated men masses, as one can not describe it,” a clumsy translation of a report by the German Federal Police reads. Some have suggested that the string of attacks was initially played down by the media and by German authorities in an effort to avoid triggering an anti-migrant backlash. Indeed, the mayor of Cologne, Henriette Reker, got herself in a bit of hot water for comments which seemed to suggest it is German women’s responsibility to keep would-be attackers at “arm’s length” and to not send the wrong message to “people from other cultures” by acting too “jolly and frisky.”

Meanwhile, Angela Merkel is attempting to salvage the “yes we can” narrative vis-a-vis Berlin’s refugee open-door policy while simultaneously condemning the attacks.

On Friday, Cologne’s police chief Wolfgang Albers was dismissed in connection with his department’s mishandling of the ordeal.

According to a draft document seen by Reuters, Germany may now change its policy with regard to the deportation of refugees. “The paper says refugees and asylum seekers who have been sentenced to prison or probation should be barred from eligibility for asylum,’ Reuters writes. “Why should German taxpayers pay to imprison foreign criminals,” Vice Chancellor Sigmar Gabriel asked. “The threat of having to spend time behind bars in their home country is far more of a deterrent than a prison sentence in Germany.”

(“Respect us! We are not fair game even when naked!” a sign held by Swiss artist Milo Moire reads)

“Women’s groups and many politicians have long been arguing that Germany’s sexual assault law is archaic, with loopholes that mean groping and surprise attacks are not necessarily prosecutable unless the woman tries to fight off the attack – which police often advise against,” Deutsche Welle notes. “There have been very many cases that you and I would probably unequivocally describe as rape or sexual assault that haven’t come to a conviction, because the women allegedly didn’t defend themselves enough,” Elke Ferner of the Social Democratic Party’s women’s group told the broadcaster.

That law is about to be changed thanks in part to the attention the New Year’s attacks have brought to the issue.

And speaking of drawing attention to the attacks, protesters are once again massing in Cologne where “thousands” of demonstrators took the streets on Saturday. “The protesters included the Islamophobic Pegida movement and the right-wing extremist Pro Cologne party” USA Today says.

More than 1,500 police officers were deployed across the city in anticipation of the rallies. Here’s more from DPA:

Cologne police are gearing up for a day of highly charged demonstrations, with 1000 far-right protesters expected to hit the streets in response to the mass sex assaults and thefts targeting women on New Year’s Eve.

Hundred-strong teams of police were deployed on Saturday to locations across the western German city, totalling 1700 officers, a spokesman said.

The Islamophobic Pegida movement and the right-wing extremist Pro Cologne party were to stage a rally on the square in front of the main train station, where about 1000 intoxicated men are thought to have robbed, sexually assaulted and, in some cases, raped women during turn-of-the-year celebrations.

Of the 32 suspects identified by police in Cologne, 22 are asylum seekers, the German Interior Ministry said.

One suspect was carrying a document with Arabic-German translations of sexist phrases and threats, which mass-circulation tabloid Bild published on Saturday.

Several pro-migration counter-protests have also been planned for Saturday, underscoring the division in German society over the government’s open-door migration policy, which allowed more than one million people to enter the country last year.

Migrants who commit crimes should lose their right to asylum, German chancellor Angela Merkel said on Saturday, toughening her tone as crowds gathered in Cologne angered by mass assaults on women on New Year’s Eve.

Nearly two dozen asylum seekers were among those suspected of carrying out the attacks, police said this week, heightening tensions over immigration and fuelling criticism of Merkel’s refusal to place a limit on the numbers of migrants entering the country.

“The right to asylum can be lost if someone is convicted on probation or jailed,” Merkel said after a meeting of the leadership of her Christian Democrats (CDU) party.

“Serial offenders who repeatedly rob or repeatedly affront women must feel the full force of the law,” Merkel told journalists in Mainz, promising a reduction over the longer term in the flow of migrants to Germany.

Under German law, asylum seekers are typically only deported if they have been sentenced to at least three years in prison, and providing their lives are not at risk at home.

About 1,700 police officers were on the streets of Cologne as protesters, including members of the anti-Islam PEGIDA movement, waited for official permission to march through the city.

At a separate left-wing protest, more than 2,000 mostly women gathered close to the train station where many of the attacks, including muggings and sexual assaults, happened.

So once again, we see a deeply divided society, with right-wing demonstrators staging a kind of “we told you so” rally and pro-refugee Germans staging counter protests even as they decry the wave of assaults.

Meanwhile, the flow of asylum seekers continues unabated. “We had an average influx of 3,200 refugees per day arriving in Germany, and the numbers are not declining in the last days,” Ole Schroeder, the deputy German minister, told a briefing in Brussels. “Our problem at the moment in Europe is that we do not have a functioning border control system, especially at the Greece-Turkey border,” he added.

Where things from here is an open question but it appears many Germans are at their breaking point. How TIME’s person of the year responds may ultimately determine how the world remembers one of the most indelible and revered politicians in European history.

This article appeared at ZeroHedge.com at:  http://www.zerohedge.com/news/2016-01-09/thousands-flood-streets-germany-fury-over-refugee-sex-assaults-reaches-boiling-point