The “Monsters” Unmasked: Cologne Police Admit “Most Of The Attackers Were Refugees” 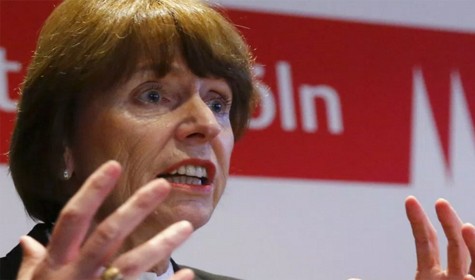 This week, many German citizens were appalled to hear the details of what allegedly occurred on New Year’s Eve in Cologne.

According to eyewitness accounts and a number of apparent victims, hundreds of “Arab or North African” men engaged in coordinated sexual assaults and robberies across Germany with attacks reported in Cologne, Hamburg, and Stuttgart.

“These people that we welcomed just three months ago with teddy bears and water bottles … started shooting at the cathedral dome and started shooting at police,” one hotel bouncer who witnessed the melee in Cologne said. “Ms Merkel where are you? What do you say? This scares us!,” read a sign carried by protesters in demonstrations held on Tuesday.

While German officials universally decried the attacks, Cologne mayor Henriette Reker drew sharp criticism for suggesting that it was German women’s responsibility to keep would-be assailants at “arm’s length.” Reker dug herself an even deeper hole by saying Germany needed to better educate migrants on cultural norms. “We need to explain to people from other cultures that the jolly and frisky attitude during our Carnival is not a sign of sexual openness,” she said.

For her part, Angela Merkel is attempting to do the impossible: convince Germans that Berlin’s open-door refugee policy is a good idea while simultaneously explaining how intolerable the string of alleged attacks is. “Right now we’re seeing a very differentiated positioning among EU member states,” the Chancellor told reporters at meeting of her CSU Bavarian sister party. “It’s important to me that we have a noticeable reduction in refugee numbers, but at the same time preserve the freedom of movement within the European Union, which is an engine of economic development and prosperity — and nobody is more reliant on it than Germany.”

Yes, we are indeed seeing “a very differentiated positioning” among states. Take Slovakia for instance, where Prime Minister Robert Fico says his government will not allow Muslims to create “a compact community.” “We don’t want what happened in Germany to happen here,” he said on Thursday. “The idea of multicultural Europe has failed. The migrants cannot be integrated, it’s simply impossible.”

On Thursday, Merkel sought to appease angry voters by encouraging Cologne police to be thorough in their investigation. “Chancellor Angela Merkel has called on Germany’s local authorities to ensure that public places remain safe for women following a mass sex attack in Cologne during New Year’s eve and mounting criticism of the government’s immigration policies,” FT writes, adding that “her intervention came as the rightwing, immigration-sceptic AfD party capitalised on the outrage by blaming her liberal refugee policy for the assaults, which were allegedly carried out by men of Arab or North African appearance.” This is the tweet (from AfD chief Frauke Petry) that FT references:

“We want public streets and squares which are safe for men and women,”  Merkel said.

While previously there was some ambiguity with regard to who actually perpetrated the attacks, authorities are now sure that “most” of those involved were “freshly traveled asylum seekers.” Here’s Die Welt (translated):

The identity checks revealed Cologne police report continues: “Only a small minority Was it North Africans, the majority of Controlled by Syrians.”

That had resulted from submitted documents. So far aimed guesses that it is the perpetrators were North African young men, because they are known as petty criminals problem group in Cologne for more than one year. But many of the Controlled talked only a few months in Germany. “Most of them were freshly traveled asylum seekers. They have presented documents that are handed out at the points of an asylum application.” The receiving site then gives the applicant a copy of the application, with a copy of the photos.

The most controlled were Syrians. Crime Scene Investigation, it had gone mainly to “sexual entertainment”.

In another point contradict New Year’s Eve employed officials of the official representation. It is said that the offender had gone primarily is to steal from passersby. The sexual harassment were only incidentally happens. “In reality it behaved exactly the opposite,” said Cologne police to “Welt am Sonntag”.“Primarily it was the most Arab perpetrators to sexual offenses or, to put it from their point of view to their sexual amusement. A group of men circling a female victim, closes it and takes on the woman.”

Yes, “only a small minority was it North Africans,” so North Africans living in Germany are apparently off the hook here. Rather, reports supposedly indicate that large groups of “primarily Arab perpetrators” out for sexual entertainment “circled” the female victims, “closed” in and “took on” the women. A terrifying scene to be sure. Here’s more:

Arnold Plickert, chairman of the police union (GdP) in North Rhine-Westphalia, defended in the “Welt am Sonntag”, the Cologne police: “The allegations by Interior Minister de Maizière, many colleagues in Cologne feel completely unjustly attacked and pilloried . It is simply wrong that the police had at night anyone arrested or taken into custody. ” And it also does not agree that any personal data had been taken, Plickert said. “According to my knowledge were at least 80 cases, Personal checks, arrested people or taken into custody.”
Plickert also defended that Cologne policeman told journalists the truth expressed about the New Year’s Eve: “That the colleagues now anonymous pierce information to the public, I can understand that you want to do away with the widespread misreporting and defend Some officials have I already told.. they felt as if they were the perpetrators. “

The GdP state leader went on to say: “Even that allegedly there is no evidence to refugees as perpetrators, I think is a hoax colleagues According to the registration certificates of the Federal Office for Migration were multiple controlled men submitted There were quite sure.. Refugees among the perpetrators.”

What that seems to suggest is that there’s an effort on the part of some authorities to cover up the involvement of migrants in the attacks, presumably to avoid triggering social unrest. Or, as we put it on Wednesday, “you’d be forgiven for suggesting that perhaps some German politicians are going out of their way to avoid applying negative stereotypes to migrants.”

Be that as it may, something tells us the German media isn’t about to let this be swept under the rug…

This article originally appeared at ZeroHedge at:  http://www.zerohedge.com/news/2016-01-07/monsters-revealed-cologne-cops-say-most-attackers-were-refugees