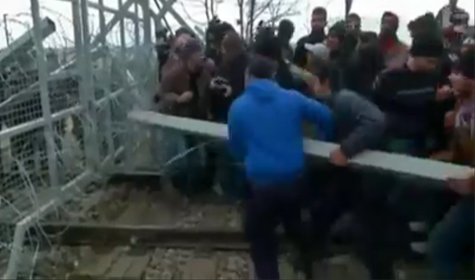 Last week, EU migration commissioner Dimitris Avramopoulos delivered a rather unnerving assessment of the prospects for Angela Merkel’s multicultural utopia: if Turkey and Greece can’t come to some kind of agreement on how to secure Europe’s external border in the next week, the bloc will simply collapse under the weight of the refugee flow from the Mid-East.

That’s right ladies and gentlemen. At least one eurocrat thinks this entire experiment with passport-free borders is going to come to a rather unceremonious end in the next five days.

EU officials are set to meet with Turkey on March 7 to discuss possible remedies to the crisis, but the prospects for that meeting aren’t great.

Erdogan is far more interested in extracting cash from Brussels than he is in helping to stem the flow of refugees. Indeed, if you had to point to one man who has contributed the most to the exodus of civilians from Syria, you’d have to look at Erdogan, whose support for Sunni extremists and anti-Assad elements has plunged Syria into chaos.

Meanwhile, Brussels somehow expects beleaguered Greece – which is completely broke and has resorted to doubling taxes on farmers to meet Berlin’s budget demands – to control the flow of migrants into Western Europe. Last week, Athens recalled its ambassador to Austria after the country held a meeting on immigration with Balkan countries without inviting Greece. “Greece will not accept becoming Europe’s Lebanon, a warehouse of souls,” Greek migration minister, Yannis Mouzalas told reporters last Thursday.

Today, frustration with the bottleneck that’s been created by tighter border checks, anti-migrant fences, and the suspension of Schengen boiled over at the Macedonia-Greece border where hundreds of Syrians and Iraqis stormed a border fence at the small frontier town of Idomeni. “Hundreds who gathered at the razor-wire fence used metal poles to bring down a gate by digging beneath the barrier and pushing it up and out,'” The Guardian writes. Police used tear gas to beat back the crowd. “About 6,500 people – mostly Syrian and Iraqi – are stuck on the Greek side of the border. Some have been there for up to eight days with little food or shelter as Macedonia accepts only a trickle of people each day,” The Guardian adds.

Here’s the scene as captured on tape, followed by a bit more color from Reuters and from The New York Times:

Macedonian police fired tear gas to disperse hundreds of migrants and refugees who stormed the border from Greece on Monday, tearing down a gate as frustrations boiled over at restrictions imposed on people moving through the Balkans.

A Reuters witness said Macedonian police fired several rounds of tear gas into crowds who tore down the metal gate and onto a railway line where migrants sat refusing to move, demanding to cross into the country.

There were an estimated 8,000 people gathered at Idomeni, the small frontier community on Greece’s border with Macedonia. Most were Syrians and Iraqis.

Macedonia recently closed its border with Greece, a major stop on the migrant trail, to thousands of Afghans after reclassifying them as economic migrants rather than refugees, a move that denied them the right to apply for asylum.

That policy, which was effectively a response to an Austrian decision to put a daily cap on the number of people allowed into the country, left thousands of Afghans with nowhere to go. It also promoted fear among Syrians and Iraqis, who worried that they might also be unable to travel further north if similar restrictions were imposed.

The Balkans have served as the main passageway for migrants, most of whom hope to reach Germany, which has accepted far more asylum seekers than any other country. Germany’s warmer welcome has led to tensions with other European countries, and last week Austria and nine Balkan states agreed to put in place several measures to choke off the flow of refugees, effectively imposing their own response to the migrant crisis.

As a result, many migrants in Greece have effectively been trapped — they cannot move on, and they cannot return home — and officials in the country said they expected the problem to worsen.

“We estimate that we will have a number of people trapped in our country which will be between 50,000 and 70,000,” the minister for migration, Ioannis Mouzalas, told the Greek TV channel Mega, Reuters reported.

This article appeared at ZeroHedge.com at:  http://www.zerohedge.com/news/2016-02-29/caught-tape-500-syrians-storm-greek-border-fence-homemade-battering-ram