Until last month, Ted Stanford of McKinney was a programmer for a Nebraska-based software company providing voting machines for Collin County’s runoff primary elections. But after Gov. Greg Abbott delayed those elections during the ongoing coronavirus crisis, Stanford said his company laid off him and eight of his coworkers.

The 67-year-old received unemployment benefits years ago. So when he tried to file a new claim online after last month’s layoff, he was required to enter a PIN he couldn’t remember.

“At that point, it says call the unemployment office,” he said. “I bet I’ve called 50 times this morning, and I just keep getting a busy signal.”

That signal has become a familiar sound to Stanford and a historic number of Texans whose incomes were lost, cut or threatened as sweeping orders meant to prevent the virus’ dangerous spread uprooted household finances, entire industries and the economy as a whole. Yet as tens of thousands of Texans try to file unemployment insurance claims, they’re finding the Texas Workforce Commission’s phone lines jammed and website servers overloaded as the agency is swamped by the crush of sudden need.

State officials recognize the problems and are scurrying to fix them. Normally, the commission receives between 13,000 and 20,000 calls to its toll-free phone number on an average day. Last week, however, that number surpassed 1.5 million calls received in a 24-hour period, said Cisco Gamez, a spokesperson for the commission.

Not all of the calls reflect individuals trying to file new unemployment claims since some people might be calling to check on their application status.

“Just know that you’re not going to be denied your claim just because you’re having a hard time getting through,” Abbott said at a press conference Tuesday.

But those assurances — and state leaders’ scramble to beef up servers and increase staffing — are doing little to appease the anxiety of Texans who face mounting bills and housing payments, which were due Wednesday for most renters.

“We’re trying to be fluid,” Gamez told The Texas Tribune on Tuesday. “We’re hiring to meet the demand.”

But many Texans who are eventually getting through say that their claims are being denied after being processed through a set of parameters that haven’t caught up to the myriad new circumstances people face in a pandemic that has changed virtually every aspect of life and the Texas economy in a matter of weeks.

Melanie Adams, a 49-year-old in Fort Worth who has a compromised immune system, had a string of chronic health emergencies that prevented her from working last year. But she finally secured a job as a cookware retailer at Williams-Sonoma, where she worked for five months before the company, like many retailers, laid off a large swath of its workforce.

She immediately started applying for unemployment and found a trick to avoiding a crashing website: File at 3 a.m.

Adams said TWC responded swiftly — with a denial. TWC said she did not qualify for benefits because she didn’t work enough prior to the health disaster.

“I was dealing with chronic health issues,” Adams said. “They are not lifting any of the standard procedures, they’re not making any exceptions for this crisis and there’s a lot of people falling through the cracks.” 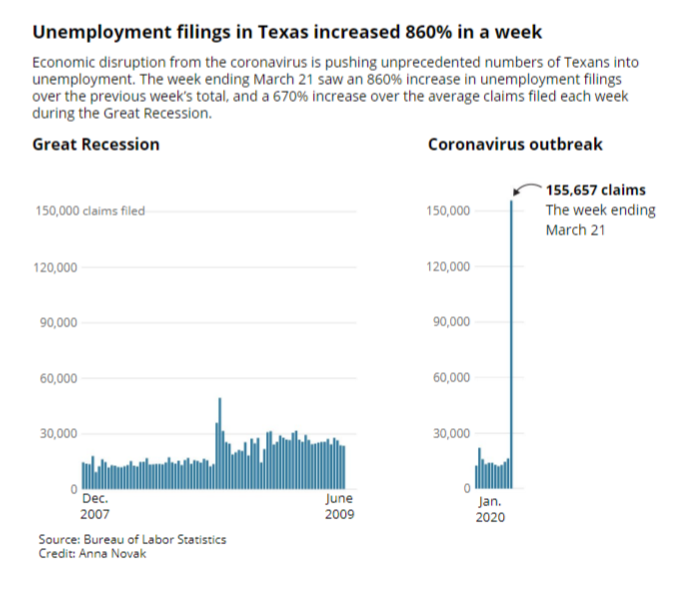 More than 155,000 Texans filed unemployment claims the week ending March 21 — an 860% surge over the previous week and a number dramatically higher than the amount of people seeking relief weekly during the Great Recession between 2007 and 2009. That number reflects people who filed claims the same week that the state’s urban areas, and eventually Abbott began shuttering bars and restaurant dining rooms.

The number of unemployment claims filed the week ending March 28 isn’t expected to be released until later this week. Those figures will show the number of people who filed claims after the state’s urban officials issued stay-at-home orders that shuttered even more businesses and barred Texans from leaving their homes except for essential trips like getting groceries, picking up prescriptions or seeking medical attention.

The numbers expected this week won’t include claims filed after Abbott issued a statewide order Tuesday that is largely similar in effect to those earlier local directives, even if he hesitated to give his order a familiar label such as a stay at home or shelter in place.

That order lasts through April and will leave schools closed until at least May 4.

When his 7-year-old daughter’s school district closed, Houston computer engineer Charles Roberts took off work because he is the only one in his house able to care for her. His employer assured him that his job will be there when he returns, but he won’t be paid during his time away. His unemployment claim was denied because he did not work enough in the months prior to filing.

Roberts said a representative for the agency gave him a customer service number to call for his unique situation.

“And lo and behold, that number has been busy since I got it … but I need something done,” Roberts said.

Mona Youngblood, 50, is a substitute teacher in Humble on a long-term assignment who said she will miss out on earnings because of an extended spring break and prolonged school closures.

“Being a substitute teacher is not like being certified,” Youngblood said. “They’re guaranteed to get paid. We’re not.”

But before filing for unemployment online, she went to the unemployment office March 23. At that time, officials were limiting the number of people in the office.

“You could see the dismay or disappointment on their faces,” Youngblood said.

Youngblood is among the lucky Texans who not only got through, but had her unemployment claim approved. She also likely qualifies for the direct payment that was part of the federal government’s Coronavirus Aid, Relief and Economic Security Act relief package. Youngblood, though, said those direct payments may still not be enough for everyone to stay afloat as society and the economy remain paralyzed to stop the virus.

“I’m not saying it’s all the government’s responsibility,” Youngblood said. “I’m thankful for what they are doing, but they could probably do more.”

The Texas Supreme Court has halted all evictions until at least April 20, but landlords are still posting notices to vacate and threatening to kick out renters after that moratorium expires. Some cities and counties have opted to ban evictions for even longer than that. But tenants are still worried about racking up late fees and having to back pay several months of rent when the state and city orders lift.

Congress’ relief package also allows for up to 180 days of grace to borrowers of federally backed mortgages. And it includes funding for many Americans to receive direct payments of up to $1,200 for individual tax filers. It also allows for an additional $600 per week on top of what the state of Texas pays per week in unemployment.

“The good news is the money is there,” Abbott said at Tuesday’s press conference.

Linda Gamble’s company had been doing well before it had to shut down because of guidelines to stop the spread of coronavirus. On Friday, two weeks after being laid off, Gamble, a cook, received her last paycheck.

“I have no rent money to be paid this month,” Gamble, of Houston, said. “Being a cook, you don’t make that much money. When I was laid off, you kind of don’t have savings to really fall back on if you’re living paycheck to paycheck.”

After losing her job, Gamble tried to file for unemployment, but the Texas Workforce Commission’s site crashed. Gamble ended up waking up at 2 a.m. just to apply.

But when she went online to check the status, Gamble’s application was denied. She was redirected to another site to appeal the claim, but she wasn’t able to successfully log in and appeal.

“It keeps saying my password won’t work or the information I’m giving is incorrect,” Gamble said. “The information I’m putting in I know is correct. When I ask for the password to be reset, nothing gets sent to me. I try and call, and all I get is a busy signal.”

All the people working in Gamble’s kitchen lost their job due to the coronavirus, she said. Gamble’s friend, who works for another employer in hospitality and lost her job before Gamble did, was also denied unemployment benefits.

With restaurants closed for dine-in service, prospects of finding a job in the near future are grim. Gamble anticipates receiving money from the federal stimulus bill, and she will continue trying to file for unemployment relief.

“They say on the news that nobody’s being denied unemployment, but yet they are denying us,” Gamble said. “It’s by the grace of God that they’re turning around and saying they can’t evict us, because where would I be?”

Stanford, the McKinney programmer, isn’t optimistic that the extra personnel and servers TWC is promising will adequately handle the influx of claims.

“I don’t think that’s going to be enough,” Stanford said.

“There are millions of people in need right now,” she said.

Gamez said that as of last week, PIN numbers created before 2015 have been cleared. However, people who have tried incorrect PINs too many times or have overpayments on their accounts will still need to call. Gamez said TWC is reaching out to people whose PINs are revoked for other reasons.

As of Tuesday, Stanford still hasn’t gotten through the phone lines to reset his PIN number.

This article was written by CARRINGTON TATUM and CLARE PROCTOR of The Texas Tribune. This article originally appeared at: https://www.texastribune.org/2020/04/01/texas-cant-keep-coronavirus-unemployment-surge/