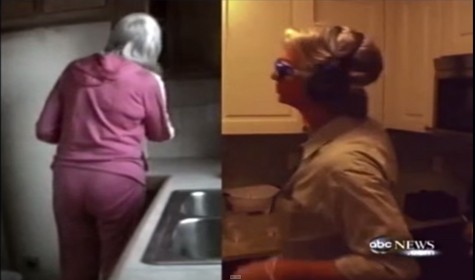 Alzheimer’s can be an extremely cruel disease.  So many Americans face the disease or must endure watching loved ones slowly grow more and more distant and/or watch the difficulties they endure with some of the most simple of tasks.  But, have you ever wondered what they are going through?  What is it like for them to be having so much trouble?

Well, a new-patented training experience is helping people experience what Alzheimer’s and dementia symptoms feel like first hand, and it’s proving to be a wonderful training tool for caregivers and family members alike.  Geriatric Specialist P.K. Bevelle, founder and CEO of Atlanta-based Second Wind Dreams, has developed a sensory alteration tool which simulates the effects of “age-related cognitive or physical decline”.  In other words, it simulates what it’s like to live with a disease like Alzheimer’s or dementia.

An ABC Nightline reporter and a caregiver underwent this training to see firsthand what it’s like to suffer with Alzheimer’s and dementia.  They were fitted with gloves and had some fingers taped to simulate arthritic joints, etc.  They were also fitted with shoe implants making it more difficult to walk.  Then they had to wear eye goggles (which simulated macular degeneration and/or cataracts as well as headphones that mimic the confusing sounds that many Alzheimer’s sufferers complain of.  The results were astounding.  Simple tasks became much more difficult or near impossible.  Something as simple as “finding a white sweater” was an exercise in futility.

Watch the video below to see what they experienced:

If you would like to learn more about Alzheimer’s, you can go to the Alzheimer’s Association at alz.org.