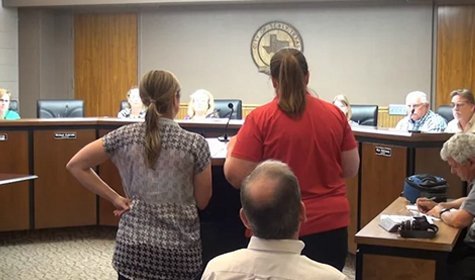 The Sealy Community Foundation presented their report (available for Download HERE) to the Sealy City Council at Tuesday nights meeting.The foundation receives money from the Hotel Occupancy Tax or H.O.T.  This tax is an additional charge placed on local places of lodging.  The tax covers hotels, motels, and bed and breakfasts, as well as condominiums, apartments, and houses rented for less than 30 consecutive days.  The State Comptroller’s office collects and administers the state hotel tax, while the City of Sealy is responsible for collecting its own local hotel tax. Local establishments remit the local taxes they collect to the City on a quarterly basis.

The report was given by Melanie Willingham and Angela Sodolok-Schmidt.  The City of Sealy Budgeted $40,000 for Sealybration for the Foundation to utilize.  Willingham explained that from the original $40,000 in seed money that the foundation was given they brought back a return of $697,280.  Willingham gave her summation:

She explained that during the time of the Sealybration that all the hotels were at maximum occupancy during its duration from people attending for not only the carnival and concert events but, also for the softball tournament that is held during the event.

For the Fantasy of Lights the city gave the foundation $20,000 and in return received $285,945.02 back into the community.  The video below covers their entire report.