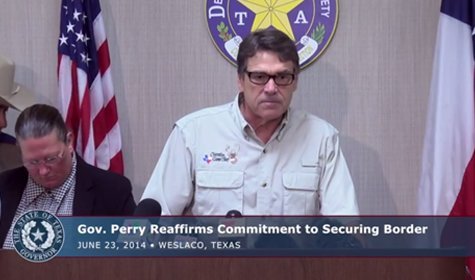 WESLACO- Gov. Rick Perry today toured a federal facility housing unaccompanied alien children, where he received a briefing from federal officials. He also reaffirmed Texas’ commitment to protecting its citizens by securing the Texas-Mexico border, and called for Washington to take actions to help curb the tide of illegal immigrants flowing across the border.

“The staggering rise in the number of individuals crossing the U.S. border illegally represents a profound and major threat to the safety and security of our state and our country,” Gov. Perry said. “The federal government needs to act decisively and quickly to end this influx, and ease this suffering.”

The governor’s visit follows Wednesday’s announcement that the state has authorized the Texas Department of Public Safety (DPS) to commence surge operations to help combat crime, especially cartel operations, occurring along the border. The state is providing $1.3 million per week to conduct the surge, which will last at least until the end of the year. DPS Director Steve McCraw joined Gov. Perry today in outlining the need for a secure border.

According to DPS, the U.S. Customs and Border Patrol has captured more than 160,000 illegal immigrants in the Rio Grande Valley this federal fiscal year, already surpassing last year’s fiscal year total of 154,483. More than half of these individuals originate from countries other than Mexico. Of the individuals apprehended this year, 37,000 are unaccompanied alien children, a figure which also has already surpassed last year’s total.

While securing our border is solely the responsibility of the federal government, Washington has failed to adopt and implement any clear strategy to achieve border security. In a letter to President Obama sent Friday, Gov. Perry urged the President to visit the border to see the emergency for himself and take the steps necessary at the federal level to help ease the trouble along the border.