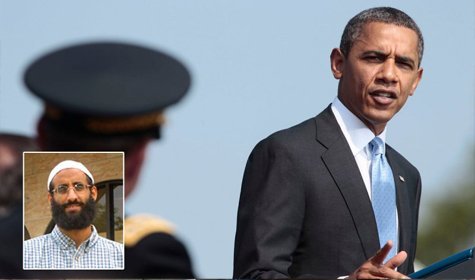 (Washington, DC) – Judicial Watch announced today that it has obtained 900 pages of newly released internal documents from the Federal Bureau of Investigation (FBI) indicating there may have been a serious rift between the agency’s 9/11 Commission Task Force (Task Force) and the National Commission on Terrorism (Commission) in tracking the activities of U.S.-born al-Qaeda leader Anwar al-Aulaqi. Additionally, in an October 2003 email from al-Aulaqi to an FBI agent, the terrorist says he is “astonished” and “amazed” by the media coverage of him and hoped that “US authorities know better.”

The documents were released as a result of the court order in a Freedom of Information Act (FOIA) lawsuit, Judicial Watch v. U.S. Department of State (No. 1:12-cv-00893), which was filed on June 4, 2012.  Judicial Watch first asked for the documents over three years ago, in September 2011.

The FBI emails obtained by Judicial Watch dating back to December 2003 suggest that agency personnel were bothered by the Commission’s “numerous and unrelenting requests” and were dismissive of the Commission’s work. The emails indicate that the FBI refused to set up interviews between the Commission and al-Aulaqi, and was surprised to learn of the Commission’s trip to Yemen, in what turned out to be a futile attempt to track down the terrorist. Quoting from the emails:

On October 23, 2003, al-Aulaqi wrote (after first leaving a voice mail) to an unnamed official at the FBI Academy:

I was astonished by some of the talk circulating in the media about me. I was even more surprised to know that the congressional report on Sep 11 had alluded to me as being a “spiritual adviser” to the hijackers. The Guardian newspaper in the UK mentioned that the US authorities are looking for me in the UK while Time magazine mentions that they are looking for me in Yemen. Well in both countries I could be easily accessed. Even though I have nothing more to say than what I did at our previous meetings I just wanted to let you know that I am around and available. I am amazed at how absurd the media could be and I hope that the US authorities know better and realize that what was mentioned about me was nothing but lies.

Despite this email and an offer to speak with U.S. officials, the final report of the Commission notes that its members were unable to locate al-Aulaqi for an interview during the course of their investigation. The report describes al-Aulaqi’s prior relationship with at least two of the 9/11 hijackers as a “remarkable coincidence” and describes him as a “potentially significant San Diego contact” of the hijackers.

Al-Aulaqi’s email offering to meet with the FBI after being identified as a person of interest by the Commission is the latest in a series of events that have fueled speculation that he was an asset or an intelligence source for the U.S. government.

Indeed, one memo obtained by Judicial Watch from then-FBI Director Robert Mueller to then-Attorney General John Ashcroft on October 3, 2002 — seven days before the imam suddenly re-entered the U.S., was detained and then released at JFK Airport – is marked “Secret” and titled “Anwar Aulaqi: IT-UBL/AL-QAEDA.” The FBI ordered al-Aulaqi’s release at JFK, even though an arrest warrant was still active at the time of his detention. On October 22, 2002, 12 days after the imam’s return, another FBI memo, also marked “Secret,” includes the subject line “Anwar Nasser Aulaqi” and “Synopsis: Asset reporting.”

In addition, documents previously obtained by Judicial Watch show that the FBI’s investigation detail that al-Aulaqi patronized prostitutes in the Washington, DC, area on at least seven occasions between November 5, 2001, and February 4, 2002, spending a total of $2,350 on the encounters. A detailed FBI investigative memorandum obtained by Judicial Watch last year shows that some agency officials sought to use that evidence to prosecute al-Aulaqi on prostitution-related charges; however, no such charges were ever brought.

Mueller refused to deny that al-Aulaqi was recruited to be an asset of the Bureau or another federal agency, telling Fox News, “I am not personally familiar with any effort to recruit Anwar al-Aulaqi as an asset – that does not mean to say there was not an effort at some level of the Bureau (FBI) or another agency to do so.”

The new FBI documents are just the latest in a continuing series of internal records Judicial Watch has obtained concerning the relationship between Anwar al-Aulaqi and the agency. In January 2014, Judicial Watch obtained 79 pages of previously unreleased surveillance reports and logs from the FBI providing evidence of ties between terrorist leaders Anwar Al-Aulaqi and Omar al Bayoumi, the government of Saudi Arabia, and FBI and Drug Enforcement Administration (DEA) counter-terrorism investigations in the days leading up to the 9-11 terrorist attack.

On September 11, 2013, Judicial Watch released surveillance reports and logs it had obtained from the FBI revealing that its agents trailed al-Aulaqi to the front doors of the Pentagon on the day he spoke as an invited guest at a Department of Defense luncheon.  The day before the surveillance and luncheon, al-Aulaqi had been identified as a “terrorist organization member,” and an FBI alert had been issued reading: “Warning – approach with caution . . . Do not alert the individual to the FBI’s interest and contact your local FBI field office at the earliest opportunity.” [Emphasis added] Judicial Watch had previously obtained documents from the U.S. State Department indicating that the FBI was aware on September 27, 2001, that al-Aulaqi had purchased airplane tickets for three of the 9/11 terrorist hijackers, including mastermind Mohammed Atta. Subsequent to the FBI’s discovery, al-Aulaqi was detained and released by authorities at least twice.

Al-Aulaqi was assassinated by President Obama through a drone strike in Yemen on September 30, 2011, the first American ever acknowledged to have been subject to a targeted killing. His 16-year-old son, Abdulrahman al-Aulaqi, was also killed by a U.S. drone attack, allegedly accidentally, two weeks later. In June, a federal appeals court ordered the release of a Department of Justice memorandum providing the legal justification for the targeting of U.S. citizens in such strikes.

“These new documents raise troubling questions about the FBI’s dealings with Anwar al-Aulaqi, a known terrorist that the FBI knew had facilitated the 9/11 attacks.  The FBI’s refusal to assist the 9/11 Commission is an outright scandal that deserves further scrutiny.  I have little doubt that President Obama assassinated a terrorist that was an asset of the U.S. government,” said Judicial Watch President Tom Fitton.  “Was President Obama aware of al-Aulaqi’s connections to federal law enforcement?  These unanswered questions cast President Obama’s decision to assassinate al-Aulaqi in a disturbingly different light.”