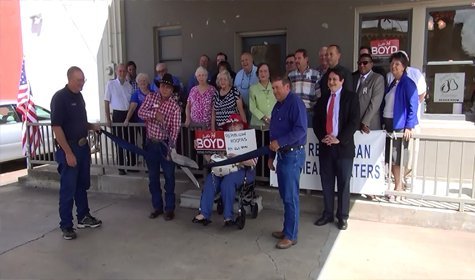 The Austin County Republican Party held a ribbon cutting ceremony for its new headquarter site in Bellville, TX. The headquarters will be located at 10 West Main St.  “We will be trying to give out information to the citizens of Austin County,” stated Michael Skrivanek, Chairman of the Austin County Republican Party.  “We will have signs and material they can come and pick up – signs, brochures and possibly voter guides.”  The person who owns the building and through Monk Real Estate the party has been able to use this site for the last ten years.

The site is a donation which is how the Austin County Republican Party has run for several years.  “We take any kind of donation,” said Skrivanek.  The organization is a volunteer group.  They meet once a month at Tony’s Restaurant the first Thursday of the month at 7 pm.  The will have a booth at the Austin County Fair.  If people would like to volunteer they can contact Skrivanek at (979) 472-0341.  The Republican Headquarters number is (979) 865-9491.

The ribbon cutting took place Monday at 12:30 pm.   County officials, private citizens and members of the Republican Party were on hand to officially open the headquarters.  Among the crowd was Steve Munisteri.  Munisteri addressed the crowd he is the Chairman of the Republican Party of Texas.  “We have had a number of ribbon cuttings, Saturday I was in Denton County yesterday I was in Castroville and today I am in Bellville,” he said.

The Republican Party is looking forward to this year’s election.   Munisteri gave a rundown of how he feels the party is doing in the State of Texas, “I believe we will keep a strong majority in the Texas House and we believe we will take a strong majority in the Texas Senate, we will maintain all our incumbents in Congress we have a good chance of picking up Will Hurd a Congressional candidate out of District 23 close to San Antonio, we anticipate winning all the statewide races and were hopeful to do that by a wide margin.”  Overall the Republican Party is outvoting the Democratic Party in the State.

The Republican Party is in need of volunteers if you would like to volunteer or if you have any question contact Michael Skrivanek, (979) 472-0341 or call the Austin County Republican headquarters at (979) 865-9491.