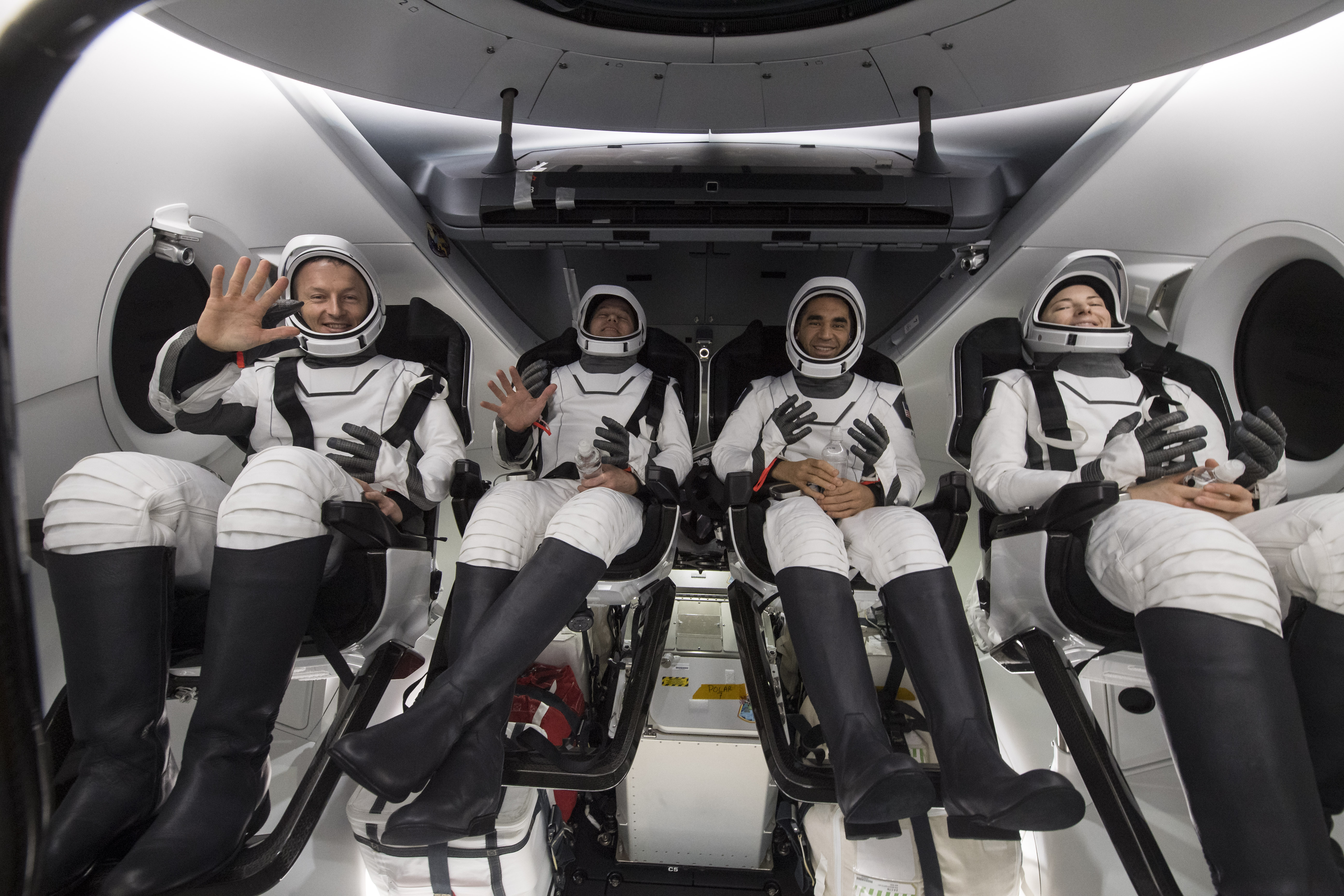 NASA astronauts Kayla Barron, Raja Chari, and Tom Marshburn, and ESA (European Space Agency) astronaut Matthias Maurer returned to Earth in a parachute-assisted splashdown at 12:43 a.m. EDT. Teams aboard SpaceX recovery vessels recovered the spacecraft and astronauts. After returning to shore, the astronauts will fly back to NASA’s Johnson Space Center in Houston.

“NASA’s partnership with SpaceX has again empowered us to deliver a crew safely to the space station and back, enabling groundbreaking science that will help our astronauts travel farther out into the cosmos than ever before. This mission is just one more example that we are truly in the golden era of commercial spaceflight,” said NASA Administrator Bill Nelson. “Kayla, Raja, Tom, and Matthias, thank you for your service and welcome home!”

The Crew-3 mission launched Nov. 10 on a Falcon 9 rocket from NASA’s Kennedy Space Center in Florida. Nearly 24-hours after liftoff, Nov. 11, Endurance docked to the Harmony module’s forward space station port. The astronauts undocked from the same port at 1:05 a.m. May 5, to begin the trip home.

Barron, Chari, Marshburn, and Maurer traveled 75,060,792 miles during their mission, spent 175 days aboard the space station, and completed 2,832 orbits around Earth. Marshburn has logged 339 days in space over his three flights. The Crew-3 mission was the first spaceflight for Barron, Chari, and Maurer.

Throughout their mission, the Crew-3 astronauts contributed to a host of science and maintenance activities and technology demonstrations. In addition, they conducted three spacewalks to perform station maintenance and upgrades outside the space station. This brought the total number of spacewalks for Marshburn to five, while Chari and Barron have each completed two, and Maurer one.

Crew-3 built on previous work investigating how fibers grow in microgravity, used hydroponic and aeroponic techniques to grow plants without soil or other growth material, captured imagery of their retinas as part of an investigation that could detect eye changes of astronauts in space automatically in the future, and performed a demonstration of technology that provides measurements of biological indicators related to disease and infection, among many other scientific investigations. The astronauts took hundreds of photos of Earth as part of the Crew Earth Observation investigation, one of the longest-running investigations aboard the space station, which helps track natural disasters and changes to our home planet.

Endurance will return to Florida for inspection and processing at SpaceX’s Dragon Lair, where teams will examine the spacecraft’s data and performance throughout the flight.

The Crew-3 flight is part of NASA’s Commercial Crew Program and its return to Earth follows on the heels of NASA’s SpaceX Crew-4 launch, which docked to the station April 27, beginning another science expedition.

The goal of NASA’s Commercial Crew Program is safe, reliable, and cost-effective transportation to and from the International Space Station. This already has provided additional research time and has increased the opportunity for discovery aboard humanity’s microgravity testbed for exploration, including helping NASA prepare for human exploration of the Moon and Mars.