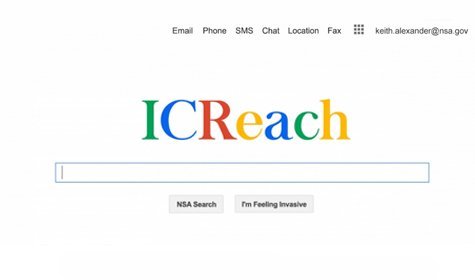 New classified documents obtained by The Intercept shows that the National Security Agency is using a search engine similar to Google, called “ICREACH” to deliver data to U.S. government agencies.

The search tool was designed to be the largest system for internally sharing secret surveillance records in the United States, capable of handling two to five billion new records every day, including more than 30 different kinds of metadata on emails, phone calls, faxes, internet chats, and text messages, as well as location information collected from cellphones. Metadata reveals information about a communication—such as the “to” and “from” parts of an email, and the time and date it was sent, or the phone numbers someone called and when they called—but not the content of the message or audio of the call.

ICREACH does not appear to have a direct relationship to the large NSA database, previously reported by The Guardian, that stores information on millions of ordinary Americans’ phone calls under Section 215 of the Patriot Act. Unlike the 215 database, which is accessible to a small number of NSA employees and can be searched only in terrorism-related investigations, ICREACH grants access to a vast pool of data that can be mined by analysts from across the intelligence community for “foreign intelligence”—a vague term that is far broader than counterterrorism.

Legal experts told The Intercept they were shocked to learn about the scale of the ICREACH system and are concerned that law enforcement authorities might use it for domestic investigations that are not related to terrorism.

“To me, this is extremely troublesome,” said Elizabeth Goitein, co-director of the Liberty and National Security Program at the New York University School of Law’s Brennan Center for Justice. “The myth that metadata is just a bunch of numbers and is not as revealing as actual communications content was exploded long ago—this is a trove of incredibly sensitive information.”

The NSA describes ICREACH as a “one-stop shopping tool” for analyzing communications.  This allows government agents to sift through the masses of records on ICREACH, engineers designed a simple “Google-like” search interface. This enabled analysts to run searches against particular “selectors” associated with a person of interest—such as an email address or phone number—and receive a page of results displaying, for instance, a list of phone calls made and received by a suspect over a month-long period. The documents suggest these results can be used reveal the “social network” of the person of interest—in other words, those that they communicate with, such as friends, family, and other associates.