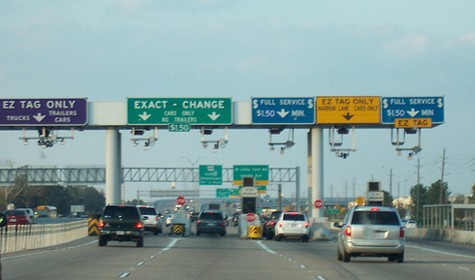 Recently at the Houston Liberty Fest panel discussions, Terri Hall, organizational leader of TURF (Texans Uniting for Reform & Freedom), gave a PowerPoint presentation on toll roads and the devastating effects they are having on Texans’ wallets.  Many people wonder where all the money that is collected for the Texas Roads goes?  Well, up until this legislative period, 52% of the gas tax that you and I pay has been diverted away from its primary purpose, roads, to other pet transit projects that Texas legislators have.  The easiest way to spot many of these transportation projects is if they are described as “sustainable”.

Where the issues come into play with today’s toll roads is that many of them in the last several years have boiled down to a double tax on Texas Citizens.  Many of our roads have been built with our tax money (free roads) and are now being converted into toll roads.   The very first one to fall under this model was the Katy Frwy Toll Road on I-10.  Basically, no one should be paying a toll to utilize any part of I-10 because the road was completely paid for utilizing citizen’s gasoline tax money.

The new toll road funding models that have been happening in Texas are described as Public Private Partnerships or (P3’s).  These are really just sweetheart deals for corporations, some of which are overseas.    What these agreements do is give these corporations a way to socialize their losses and privatize their profits.  It is corporate welfare by the State Of Texas at its worst.  These deals give private corporations the power to:

and sometimes these agreements can have

Recently Mary Benton HCTRA spokeswoman explained the reason tolls were being raised.  Normally tolls are raised to compensate for a lack on traffic on the toll roads.  This lack of traffic equals a shortfall that must be made up in order for the necessary funds be available to cover the debt service on bonds utilized to pay for toll road originally.  But, Mrs. Benton explained that they were raising rates (in an effort of social engineering) to make more people ride the bus.

“What we’re saying to people is that these rate adjustments may not work for you, but we want you to think about your personal choices: pay the adjusted rate or drive on another section of I-10, consider carpooling or take the bus.”

To date, 7 billion (that’s billion with a “b”) has been spent to subsidize these toll roads in Texas.  And, TxDot’s ten year plan calls for an additional 11 billion to be spent on toll roads.  This is why we aren’t seeing any free road expansions in the state.  They are utilizing the gasoline tax that we pay in order to subsidize these toll roads and then charging us AGAIN to drive on them.  This is nothing more than double taxation!  For an EXCELLENT in depth explanation of exactly what is happening please watch Mrs. Hall’s PowerPoint Presentation below: