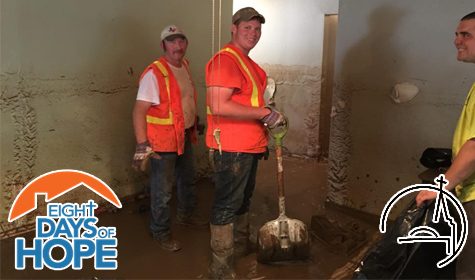 The Eight Days of Hope Ministry left their mark on Austin County.  The Christian Ministry came in and worked with other volunteers from the area in the Lazy River Subdivision and other areas of Austin County.   The Lazy River Subdivision was hit very hard by the flooding of the Brazos River and volunteers worked tirelessly for days doing what was necessary to try to help the victims in their time of need.

Commissioner Doug King of Austin County Precinct 4 outlined the clean-up that was happening at Lazy River and some of the challenges he was facing in his precinct after the flooding.

“We’re assisting with at least 3 men a day with 3 pieces of equipment every day.  Our biggest problem is keeping dumpsters rotated out so we can keep moving…we have the dumpsters but, we can’t keep up.  We can fill 5 dumpsters a day.  On your average 2000 square foot house you’re talking 2 dumpsters minimum per house if they got water damage.  I think all but, 3 or 4 houses out there have water damage.”

The biggest bottleneck to the cleanup was the dumpster rotation because the dumpsters had to be taken to Fort Bend County to dump the water damaged material.  Before a dumpster and driver were able to make it back round trip other dumpsters were ready to be taken away and dumped as well.  You can watch the video of his description and statements to Austin County Commissioner’s Court on the Lazy River cleanup effort:

The Eight Days of Hope Ministry did and does everything from helping people pack their stuff up to tearing out insulation and flood debris to helping with tearing down complete houses and helping to haul it off; anything and everything that the flood victims would need.  The group stays in an area as long as there is active work to be done.  Should they find themselves idle for an extended period of time they will move on to other areas affected.

We are headed to Sealy, Texas this week to aid the flooding victims. Volunteer information is on our website or call 662.255.7565. #Pray4Tx

The ministry teamed up with Christian City Fellowship who acted as the staging grounds for volunteers and the ministry to operate from.

What started as a one-time visit to the Gulf Coast with a handful of people after Hurricane Katrina.  The ministry has since blossomed into thousands of volunteers ministering to people’s needs after Hurricanes Katrina, Rita, Irene, Isaac, the floods in Cedar Rapids, Iowa and Nashville, Tennessee, the tornadoes in Northeast Mississippi and Northwest Alabama.

And now they’ve come to the flood victims here in Texas.  The ministry is registered as a 501(c)(3) not-for-profit organization and gladly takes donations.  You can visit their website and learn more about them by going to:  http://www.eightdaysofhope.com/

The Eight Days of Hope Ministry and Christian City did some phenomenal work for our community.  And, rather than try to post all the pictures of their work and workers we’ve created a video montage for you to watch.  We would like to thank Pastor Rusty Griffin who took many of these photos and posted them to the Christian City Facebook Page and made them available to the public.