Google Releases Its Robotic Dog In The Wild, Leads To The Following “Close Encounter” [VIDEO] 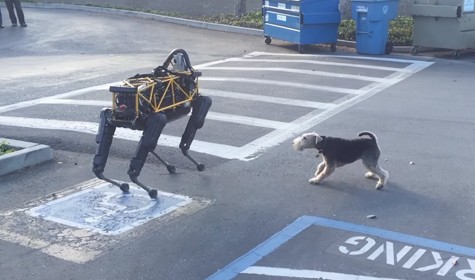 One week ago we showed a clip by Google-owned Boston Dynamics in which a 5’9″, 180lbs humanoid robot called Atlas engaged in various human activities, such as walking, picking itself up, opening doors, and carrying heavy loads. The robot in question, clearly an old prototype (which prompted many to wonder just how far advanced is the underlying technology now if Google has no industrial espionage concerns with this particular specimen) was not only this close from putting millions of workers in menial, repetitive occupations out of a job, but could easily serve as a solider in any army that has a “lower” standard of acceptance.

It was the latter which led to visceral reactions among viewers, some of whom complained that the clip was “disturbing”, “frightening” and outright “terrifying”, and if there is anything Google does not want, it is to scare the general public with its arsenal of “disturbing” robots.

Which may explain the resulting attempt at damage control, because one week after GOOG shocked the public with the eerie-looking “Atlas”, it has now gone the cuteness route and released another clip, this time of Spot, Google’s electronic dog, which is seen in the following clip in “the wild”, engaged in a close encounter with an actual terrier belonging to Android cofounder Andy Rubin.

The terrier’s less than enthusiastic reaction is about what one would expect.

While the clip is also disturbing, as BGR puts, it, “watching a dog play with a robot is far more enjoyable than watching a bunch of humans abuse a robot.”

The robot’s lifelike movement catches the attention of a real dog. The uncanny uncanine valley. This is the latest quadruped robot from Google’s Boston Dynamics group, and the only one outside of the military

See spot… do whatever it is robotic dogs do.

A demonstration of the new dog on the block, the Spot robot by Boston Dynamics. The military has all of the other ones.

We can’t wait to see what the “uncute” military version out in the wild next.

This article appeared at ZeroHedge.com at:  http://www.zerohedge.com/news/2016-03-01/google-releases-its-robotic-dog-wild-leads-following-close-encounter