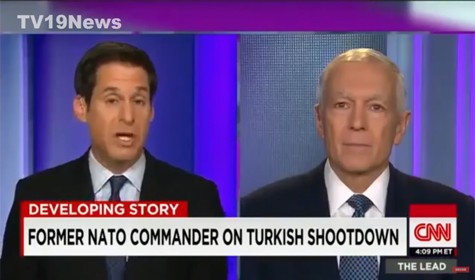 Former NATO Supreme Allied Commander General and retired U.S. General Wesley Clark revealed in an interview with CNN that the Islamic State (Daesh, ISIS) remains geostrategically imperative to Sunni nations, Turkey and Saudi Arabia, as they clamor for strategic power over Shi’a nations, Syria, Iraq, and Iran. He explained that “neither Turkey nor Saudi Arabia want an Iran-Iraq-Syria-Lebanon ‘bridge’ that isolates Turkey, and cuts Saudi Arabia off.”

When asked by the CNN host if Russian President Vladimir Putin’s suggestion that Turkey was “aiding ISIS” had any validity, he responded:

After explaining this virtual gateway for the Islamic State’s oil, Clark was quick to emphasize that Putin’s allegations about Turkey’s support for terrorist organization, ISIS, aren’t without their own hypocrisy. Russia, of course, has beenupholding President Bashar al-Assad’s administration in Syria against rebel groups backed by the U.S. — despite continuing denials by U.S. officials that that particular theater is its primary interest in the region.

Clark concludes the interview with a statement that encapsulates growing sentiment of many Westerners who’ve grown war-weary with such geopolitical wrangling overseas:

“There’s no good guy in this – this is a power struggle for the future of the Middle East.”

This article appeared at ZeroHedge.com: http://www.zerohedge.com/news/2015-12-03/general-wesley-clark-isis-serves-interests-us-allies-turkey-and-saudi-arabia